It is very important to get comfortable with the controls as quickly as possible. Understand how far the Spelunker can jump forward and remember it well, because there are many times when you have to leap from a ledge in order to land on a very narrow platform. The ability to safely land on a small targets is vital. Remember that if you die, you will return to the location of the last item that you collected. If you fail to navigate an obstacle, chances are high that you'll have to repeat the attempt. Also make sure to time your jumps over the mounds that shoot steam in the air. They fire off with very regular timing, so stand in front of one for at least two puffs if you're not sure of timing.

Except for the arcade version, there are only two enemies to deal with: ghosts and bats. They are both easily dealt with, and you are only likely to die if you are not patient enough to deal with them properly. As soon as ghosts are a few inches away from you on the screen (horizontally, not vertically), you can fire your gun and cause the ghost to deteriorate. The ghost must be within range for the gun to work on it, and the deterioration is not instantaneous. In fact, you can die if the ghost manages to touch you while it is still dissolving. Make sure you do not try to remove the ghost at point blank, or you will likely die. Remember that the height of ghost above or below you does not affect the effectiveness of your gun, only the horizontal distance left or right. Also remember that you are motionless and defenseless to everything else while the gun is firing. Bats are easy to deal with as well. All you need to do is fire a flare up in to the air, and they will be removed from the screen for the lifetime of the flare. They will return as soon as the flare dies out. There are many more flares to collect in the game than there are bats to deal with, so use your flares liberally. You will regret giving up a life when you could have given up a flare instead.

Except for the arcade version, the cavern is the width of two screens and is divided down the center. The screen does not scroll over from one side to the other until the player passes that center line. Ordinarily, this doesn't cause much of a problem. However, a pit or a hole can be placed right on the other side of the divide. If you're not familiar with the section of the cave that you're crossing over to, do not direct the Spelunker forward until the entire screen has scrolled into view so that you do not risk falling into an unseen trap. Also, if you hear the music of the ghost, it may not be a wise idea to cross screens until the ghost comes into view. If you're not sure where the ghost is coming for, you may walk right into the ghost as the screen scrolls over.

Leaping from ropes or ladders[edit]

Except for the arcade version (once again), jumping off ropes and ladders can be a dangerous, but necessary, endeavor. It is especially tricky to perform on the NES and MSX versions of the game. The timing for this maneuver is very specific, and anything else will most likely result in an unfortunate death. In order to successfully leap from a rope or a ladder, you must push the direction first, and the jump button a fraction of a second later (like a ta-tap, as opposed to a tap tap.) If you press jump first, or press them both at the exact same time, the jump will not register. For this reason, you should be as far along side of the rope or ladder that is opposite of the direction you wish to jump. You have a width of about three pixels that you can move in either direction to the left or right on the rope. So if you wish to jump left, move to the right of the rope's center before attempting to jump. On the Atari or Commodore version, you may instead hold the button first, then tap the stick to jump off. This is MUCH easier, and less hazardous to your characters health. More important to consider in these versions is the distance between you and another rope or ledge that you wish to jump to. Sometimes it is necessary to make sure that you are as close to your destination before initiating the jump or you will not be able to reach it, and you will fall to your death. In the arcade version, pushing left or right fortunately only causes the Spelunker to lean in one direction or the other, and he will never fall off the rope or ladder, making it safe to press jump whenever you like. Too bad the NES and MSX versions could not be programmed with the same benefit. 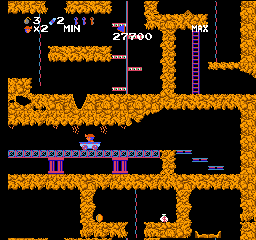 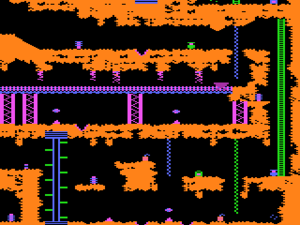 The first area is marked by the presence of elevator that runs up and down the entire length of the left side of the cavern. This will provide easy access to the various levels of the first area, although you will be forced to abandon it from time to time in order to collect all of the keys needed to get out of the level. It is wise to progress through the first area by taking each level from the top to the bottom without skipping anything. Two areas of difficulty come near the middle of the stage. Around the first time you encounter a bat, there is a set of rising and lowering platforms. Jumping from the descending left side to the ledge high along the right side, and jumping from the ascending right side back towards the elevator can be incredibly challenging and takes precise control to succeed. However, the NES and MSX versions have a benefit over the older versions here, as it is very easy to simply drop off from one platform to another one that passes in the opposite direction, so you don't have to risk a jump to cross over. Later on, you will encounter a mining cart along a set of tracks. There is nothing exceptionally difficult about this other than the timing of the gas that descends from the ceiling. You must avoid the gas and get the mine cart all the way across the tracks in order to collect another key. Take your time, and when you cross the center of the screen, pause and let the entire screen scroll into view before proceeding. 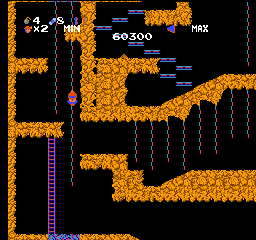 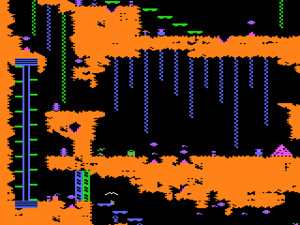 The Ropes area is signified by the large collections of ropes that descend from the ceiling that must be traversed by leaping from one to the next. This can be especially trying on the NES and MSX versions, but fortunately, there are considerably fewer ropes in those versions than in the older Atari and Commodore versions. You need to take your time and progress steadily in order to stay alive, but you can't take too long because your air supply is constantly dwindling. Aside from the ropes, the only other remarkable feature found in this area are the chains of platforms that you will see for the first time. Naturally, these platforms are arranged in a logical progression that can easily be jumped along without fear of dying. Typically, they can just as easily be fallen upon when going from high to low, but continue to use your best judgment. 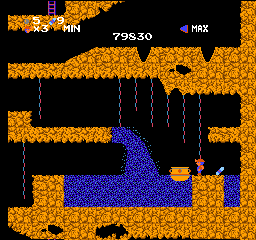 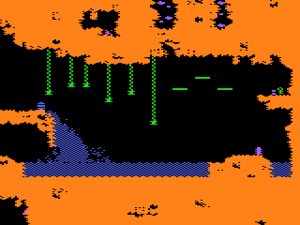 The next area continues to utilize difficult setups encountered in the first two areas and throws in some new elements. Two major new elements involve water. The first one is a small waterfall. The older and newer versions depart here. In the newer versions, the Spelunker must jump out to some ropes and climb down to reach a floating cauldron that may be ridden back and forth. The older version is much more difficult. You must ride a barrel down the waterfall, and initially proceed to the left and jump out. You must collect a new piece of chain link, and return to the barrel. Jump back in and now proceed to the right. When you jump out, the barrel will disappear, and if you did not collect the chain link, you will be marooned on the island, forever if you collected the item on the island before dying. If you have the chain link, it will automatically connect to the ceiling, allowing you to climb up and collect the key before leaping back to the left and on to the rest of the cavern. 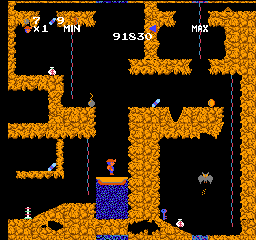 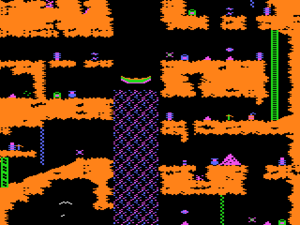 Next you will encounter a geyser with a platform that constantly rides atop the flowing water. You must ride this platform to reach various areas on either side of the geyser, some of which can be ignore, while others a necessary. There are fewer areas to search in the NES and MSX versions, and the geyser rises and falls more frequently, so it's difficult to run out of air while you are waiting. On the other hand, the older version is much more difficult, as it takes quite a while for the geyser to complete it's cycle, and you can easily expend half of your air supply while waiting. To make matters worse, a bat likes to hang out just above the top of the geyser shaft, making it a little more difficult to cross the very top of the geyser without using a flare to clear the way first. Once all of the keys have been collected, the next area can be access by running left from the very bottom of the geyser. 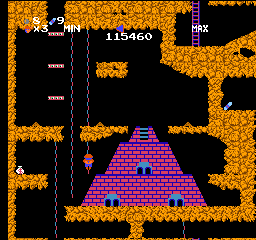 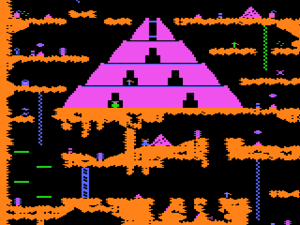 (The older version breaks this area up in to two parts, the Pyramid, and the Treasure.) The final area is easily recognized by the presence of pyramids which are scattered throughout a couple of portions of the cavern. Pyramids are composed of platforms that can be crossed just like regular ledges, in order to obtain items the lie on the opposite side of the pyramid. In the older version only, there are a few one way trips that must be taken to advance. By walking towards the left doorway from the right side, you will advance to the second floor of the large pyramid. If you fall back down, you can not return and you will be trapped, so make sure you remain on that second floor. Aside from these pyramids, very little else distinguishes this area from the others except the excitement you might feel when you reach the very bottom of the cavern and it stops scrolling. You will have to climb back up along the left side of the cavern for a while to reach the ultimate destination of the game. The jumps are trickier, bats and large mounds are more frequent, and the ghost appears a little more frequently. Patience is still the key to success.

Go to top
← How to play | Walkthrough | Spelunker →