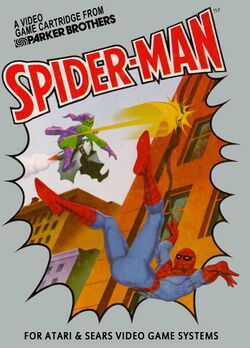 Spider-Man is an action video game released in 1982 by Parker Brothers for the Atari 2600 and Odyssey 2. It was the first video game to feature Spider-Man.

The game involves players controlling Spider-Man to scale a building using his web shooters in order to defuse bombs planted by the Green Goblin. Spider-Man is only able to use his web lines to move up the building, and if touched by enemies they will cut the line and send him plummeting below, though the player can shoot another web in time to save themselves.

Spider-Man is the hero of the game. He is able to shoot webs from his hands to bring himself up the building and to the top where the Green Goblin awaits.

Green Goblin's henchmen are scattered around the building, waiting in windows to sabotage Spider-Man. Swing around them to avoid losing a life. 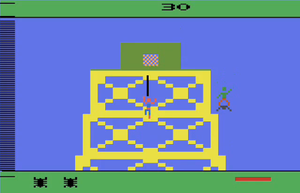 Get to the top of the building

Upon reaching the top of the building, Spidey must then face off against the Goblin, who has planted a "super bomb", whose fuse is activated upon defeating a certain number of enemies and/or defusing a certain number of small bombs. Once the fuse is lit, there is a limited time to reach the super bomb before it detonates, claiming one of Spidey's lives. Upon defeating the Goblin (which involves simply avoiding him) and defusing his super bomb, the game starts over at the next level, which may feature faster-moving and/or more instances of the Green Goblin, taller buildings, taller scaffold sections or a quicker-depleting supply of web fluid. The building is also sometimes a different color.