To begin the next mission, MJ calls about a potential lead on Isaac Delaney. Follow the waypoint to the Empire State University campus, where a Halloween party is taking place. Enter the campus through the entrance decorated by the giant skull and follow the path to the left to find Mysterio's Hall of Mirrors. Press

to speak to the costumed Mysterio, and then follow them into the Hall of Mirrors. At the end of the short path here is a scene, after which you can exit and continue the hunt for Delaney. After another short scene, head to the right to find a ramp that will lead you to the costumed Vulture. Hold

to parkour toward him, and he will then direct you to the dance floor. 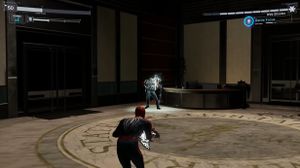 Web up the Demon with the whips after a Perfect Dodge to leave him open for attack.

On the dance floor, press

rapidly when a man dressed as Rhino attacks. Spider-Man will then web him up, but by that point, Delaney will have been taken away. Run up the wall of the building that he is taken into to find a window that you can enter through. Upon entering, Spider-Man will reveal himself to the Demons to save a student. After the simple QTE, fight the Demons head-on. There are plenty of objects to throw around here, and you can also take advantage of gadgets such as Web Bombs or Electric Webs to subdue the crowd. Try to stay out of the air as long as the Demon with the whips is still around, as he'll yank you right back down to the ground. You can stun him with a Perfect Dodge and then web him up for the opportunity to beat him into submission. 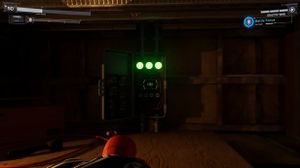 Shoot an Electric Web at this fuse box in the vents to kill the lights.

Once the room is cleared, look up on the wall above the laboratory entrance to find a vent. Zip to it and crawl through until you come across a fuse box, lit up with green lights. Equip the Electric Webs and shoot one at it to take out the lights, causing confusion among the Demons down below. Drop down the first vent marked by a

prompt to find yourself between two Demons, one in front and one behind. Take out either with an Impact Web, as they won't be able to see you instantly due to the darkness, then find a hiding place to begin taking out the others stealthily. Some may come near, in which case you must shoot an Impact Web as they pass; if you run out of Impact Webs, you can also shoot them to the wall with Web Shooters, though this is riskier. If one of the Demons notices you, webbing them up will delay their call to the others, allowing you to take him down before he does so. Once they're all taken down, approach the window marked by a

Spider-Man will now climb out onto the side of the building. Follow the path right, around the Halloween decorations, and into a vent. Following a scene in which Mister Negative escapes, you'll be left to do battle with his henchmen. Again, use gadgets and objects from the environment to stun the enemies, and dodge regularly. A brute will eventually arrive with some reinforcements; just as with the whip-wielding Demons, use a Perfect Dodge and Web Shooters to stun him. Once the enemies are all defeated, you can exit the building for some more trouble. 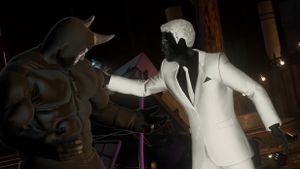 The last student that Mister Negative controls is the one dressed as Rhino; take him down to finish the mission.

Mister Negative has infected the partying college students with his mind-controlling negativity, forcing Spider-Man to knock them out as well. Fortunately, the students are much easier to handle in a fight than the armed and combat-season Demons, but progressing will trigger a scene in which the large student dressed as Rhino is also infected. Use Perfect Dodges, objects from the environment, and gadgets to web him up and take him down. Repeat this process until the

prompt comes up, after which Spider-Man knocks him over. This concludes the mission, though Delaney is dead and Mister Negative is still at large.

Afterward, Spider-Man calls Yuri about Dr. Morgan Michaels, the man that Martin Li is looking for. It seems he has something sinister planned for Michaels' research...