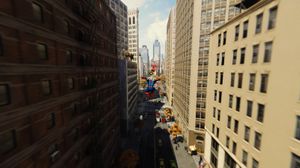 Half of this first mission is getting to Times Square, represented by the yellow waypoint.

This short introductory mission will give you some basic insight on how the game plays.

Get acquainted with the web-slinging mechanics before receiving a call from Captain Yuri Watanabe of the New York Police Department, who has evidently been working with Spider-Man for some time. After the chat, you'll receive your first waypoint: this yellow marker represents a checkpoint for story missions, as well as a way to start them when roaming the city. In this case, follow the waypoint to Times Square. There, after a cutscene, you'll find yourself in your first battle against some of Wilson Fisk's thugs.

Follow the onscreen instructions to defeat the thugs, starting with a Web Strike, executed by pressing

, to quickly close the distance between Spider-Man and the gun-toting thugs. As your health is limited (as indicated by the health bar in the top-left corner of the screen), make sure to dodge regularly with

whenever the Spidey Sense prompt pops up over Spider-Man's head. If playing on Spectacular difficulty, the thugs will take a bit longer to defeat and they'll be dealing more damage, so hold

when approaching them to launch them into air combos. After finishing a combo, the thug will be knocked back, so make sure to use

to zip back toward him and finish him off. Keep in mind that you can also dodge in mid-air, as Spider-Man will zip to the side using his webs.

[Go to top]← Walkthrough | Clearing the Way | The Main Event →