Swing to the waypoint for a scene that kicks off some action. Once in control, Spider-Man will be free-falling toward the armored vehicle where Dr. Michaels is being held. Pursue it close enough, pressing

to dodge the occasional rocket, to earn the

prompt that causes Spider-Man to latch onto the vehicle. Keep in mind that it is possible to fall off the truck, and doing so will give you a

prompt which you must use immediately to zip back onto the truck. If not, Spider-Man will have to pursue it once more, which may take some time. 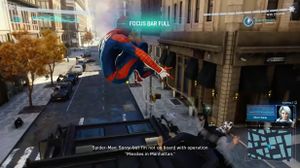 The Battle Focus suit power is a great help in generating Finishers.

Take out the Demon with the rocket launcher first, as he could very easily launch Spider-Man right off the truck. You can then attack his lackeys, using gadgets (such as the Impact Web, which will knock enemies away) if necessary. Once the gun-toting reinforcements on the truck are taking care of, a Demon will start firing from behind. Zip to the car that he's riding and press

to take him out of the equation. Do the same for the other car to trigger a scene in which a Demon dual-wielding whips attacks Spider-Man from the truck. Dodge his attacks to confuse him and take advantage, though you may want to incapacitate his rocket launcher-wielding lackey first. A QTE follows the defeat of these last two Demons, after which Spider-Man must climb up the underside of the truck to retrieve Dr. Michaels' briefcase. But of course, Mister Negative won't make this task easy, knocking Spider-Man out with his mysterious power. 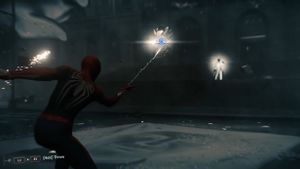 After his vanishing act, toss the mask back at Mister Negative to begin the fight.

Spider-Man wakes up in a dark and desolate landscape, with only Mister Negative in front of him. When he vanishes, zip up to the platform that he ends up on and he'll vanish again, this time reappearing in front of a crowd. This eerie recreation of the explosion on the day of the award ceremony is meant to distract Spider-Man from his target, so when Mister Negative vanishes once more, follow him to the left, in front of a tattered police flag. Then, follow him to the car wreck, and the podium, and so on, until he summons a floating mask to the center of the plaza. Toss the mask right back at him to begin the boss fight. 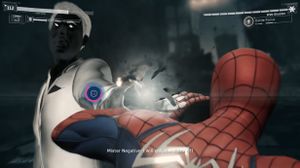 Once his negative pawns have been taken out, Spider-Man can begin to fight Mister Negative himself.

The negative figures that spawn can each be defeated with a single hit, but you may need to do some dodging to avoid being overwhelmed by the mob. Once this phase of the battle concludes, Mister Negative will spawn more negative figures, this time with some wielding weapons. Dodge their strikes whenever necessary and continue the assault for another wave to finally draw Mister Negative himself out for a fight. Attack him for a single QTE which begins the next phase of the fight.

Mister Negative will hide himself behind a giant Demon mask, summoning negative figures with whips to distract Spider-Man as he launches bombs at him. Dodge the whips and hold

when a bomb comes flying at Spider-Man to toss it right back, doing damage to the giant mask. Three bombs should destroy the mask, ending the fight and Spider-Man's trip into Negative's domain.

With Spidey back to his senses, press

to have him stop the truck, though this feat causes him to once again lose consciousness. The mission is concluded after another scene, with Devil's Breath now in the hands of Mister Negative.