You have some time to tackle side activities before MJ calls to begin the next mission. Swing to her apartment for a scene, after which the perspective switches to MJ's. An enemy stands in her path. Wait for him to get distracted and move forward a bit, allowing MJ to reach an object marked with a speaker icon. Press

to have her knock it over, compelling the enemy to move backward and giving MJ the opportunity to move forward, behind his back. Sneak around the right side of the shelves to reach the first waypoint, behind the window. Upon hearing some discussion between bikers, you can begin moving to the next waypoint. 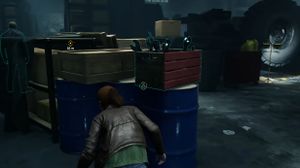 Along the narrow path to the next waypoint are some more bikers. MJ can easily pass the first pair, though there are some boxes and broken glass in her way. Pass these obstacles carefully to avoid bumping or stepping on them, alerting the enemies. The next object marked with a speaker icon can be tossed aside to distract the third biker, again allowing MJ to pass him. Follow the path between some more boxes to the second waypoint, by some giant tires. Around the tires is a biker on patrol. Take cover behind some objects on the left to avoid his gaze. Eventually, he'll come toward your cover, after which you can go around the other side and run for the next distraction object. Pressing the button draws the biker on the ramp to MJ, giving her the opportunity to follow the path up the ramp herself.

Down below is another biker. Wait for him to turn his back on MJ to head around the right side of the crates. Make sure his back is turned before continuing to the next waypoint. Be careful here; there are plenty of bikers wandering around, but MJ can easily sneak past as long as she moves quickly, while their backs are to her. Press

at this waypoint for a scene, during which MJ glimpses the might of the bikers' boss: Tombstone. After the scene, head around to the left of the distraction object and press

to distract the one biker standing in the path to the office. Run in, take a picture of the blueprints, and examine the GPS trackers on the desk to trigger a scene that concludes the mission.