near the window on the roof to drop in. After a scene, follow the path straight through the vents, then drop down through the vent after a right turn to begin the attack on the Demons below. Spider-Man will have to take them down stealthily, so after reaching the waypoint, fire your Web Shooter at the floor as instructed. The nearby Demon will approach the web on the floor, allowing you to perform a Perch Takedown with

. Zip to the scaffolding ahead, then to the vent on the wall with

to continue hunting down the Demons. The path through the vent leads you to your next target, which you can take down on the spot with

before dropping down with 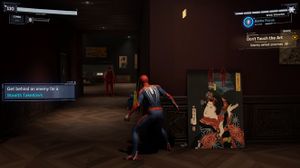 to scan the room before a takedown.

when close enough to take him down silently. Afterward, you can zip to the scaffolding above, and then through a vent in the wall on the right. Follow this path to another vent, and then drop down onto a shelf. There are two enemies in this room though pressing

shows that targeting either enemy is dangerous. Rectify this by firing the Web Shooter at a nearby crate; the enemies will split from each other, allowing you to target them separately. Approach the camera hanging on the shelf and press

to examine it. This triggers a scene, after which the perspective will change. 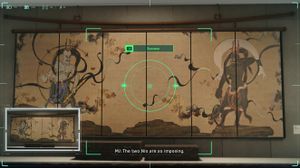 Take pictures of the artifacts on display as instructed. The photo is displayed in the bottom-left corner of the screen after being taken.

Feel free to examine some of the pieces on display for some commentary from MJ before following the waypoint and beginning the interview. Follow the subsequent waypoints to some of Fisk's valuables, which you can snap photos of for the article. Make sure the camera display is green when taking a photo to progress the interview. During an interruption, you'll be instructed to take a photo of a familiar statue in a back room. Afterward, follow a waypoint to the restroom to begin sneaking back to the statue. Hide behind the display cases as you make your way back to the statue. The final waypoint, the doors to the back room, can be difficult to get to without raising suspicion, as the owner is close by. 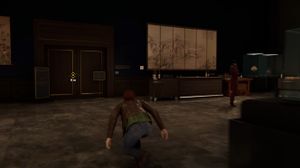 Rush into the back room when the owner's back is turned.

Wait for her to walk to the right of the door and turn her back. From the left side of the display case, rush past by holding

before she turns back around. You can now investigate the office; a desk to the right of the entrance has some details about the statue, including a pamphlet describing its most common pose:

Another pamphlet shows a weapon in the statue's hand, which is strangely absent at the moment. To the left of this desk is a display case holding the weapons, which you can't investigate just yet. Examine the statue to begin adjusting its pose as described by the pamphlet. Once you're done, return to the weapons and select the right-most one. Bring it to the statue to trigger a scene which brings the perspective back to Spider-Man. 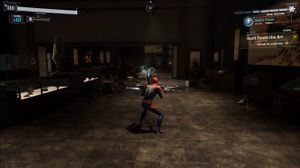 Web this axe-wielding demon up before attacking.

Aim at the ceiling and crawl through the opening to sneak into the room full of Demons. Make sure to use

to determine which targets are safe before attacking, and zip back up to the scaffolding with

after performing a takedown, as staying on the floor for too long will cause the other Demons to notice you. If you begin to get impatient, you can fight the crowd of Demons head-on rather than stealthily. After a scene, you'll have to defeat some more Demons, this group tougher than the last; make sure to use the Spider Sense regularly, dodging with

when it tingles, to avoid some charged punches. This group is followed by a lone Demon with a charged weapon. You can't punch this guy directly, as he'll block every shot with his weapon. Instead, web him up with the Web Shooter as he runs at you and then strike. Some more Demons will follow, but they shouldn't pose much of a threat as long as you web them up and dodge regularly. Defeating them concludes the mission.