Follow the waypoint to the recycling center. Before beginning the investigation, Spider-Man will have to clear out the enemies in the area. Take down the Demon closest to the gate, before he walks toward the Demons by the truck or after he walks away from them. To separate the two Demons by the truck, you can fire your Web Shooters at a distraction object or fire Impact Webs at both Demons before one can alert the others; the latter is a riskier but quicker approach, as it should stick both Demons to the truck. Some more Demons will wander toward you from the other side of the area. Ignore them for now and zip to the roof of the recycling center, taking out the lone Demon here. 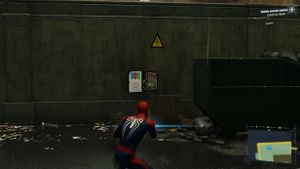 Some junction boxes are hidden, like this one behind some boxes you can smash by pulling a dumpster.

If you zip back to the truck, you should find a Demon investigating his webbed up colleagues. Take him out. This leaves only two Demons to take down, and seeing as they separate eventually, finishing them off shouldn't be a difficult task. Once this objective is completed, follow the waypoint to the entrance of the recycling center, which is protected by a high-security lock. Use

to find the junction box and shoot it with an Electric Web (you'll have to pull the doors off before you can shoot it). The next junction box is located on the other side of the structure, and the next can be found along the wall to the right, hidden behind some crates; smash them by pulling the dumpster to the left, then shoot this penultimate junction box. The last can be found up high, along the wall to the right of the lock.

Enter the building and pull on the grate to continue through. Zip to the vent up high on the left wall, and drop through the vent on the opposite side. In this room is a map, some high-tech equipment, a blueprint for a shipping truck, some guns, and a Fisk Construction crate to examine. Pull the grate open to leave the recycling center and follow the waypoint to the next location. 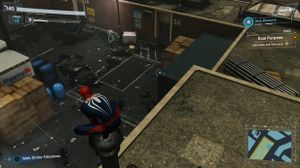 Even if an enemy falls to the Trip Mine in front of another, the witness won't notice Spider-Man.

Once you reach your location, you'll be able to craft the Trip Mine. This gadget is incredibly helpful in stealth situations, and even allows you to tether goons to each other in combat. For now, shoot it at the boxes to the right of the nearest Demon as instructed and watch it work its magic. You can then take out the Demon that approaches to investigate with ease. On the other side of the area, there are some more Demons; the closest are the one standing right by the gate and the one a distance away from him but still directly in his line of sight. Shoot a distraction object behind some trucks to remove the Demons from each other's sights and take them down. Further down, past the gate, are three snipers and plenty more Demons on the ground. 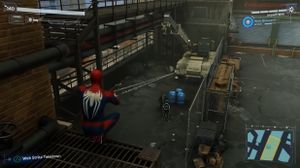 Pull this crane down on the unsuspecting pair of Demons to knock them both out.

Start by taking down the three snipers, as they are unwisely isolated from each other. The Demons roaming around in the center of the area can also be taken down relatively easily, as they are more often than not separated from each other. This leaves two pairs: one by some barrels and one by a truck. The pair by the truck may split from each other in order to investigate their webbed colleagues, making them easy to pick off, but if not, use some nearby distraction objects or even a Trip Mine to do the trick. As for the pair by the barrels, they are much more tightly-knit, but are also easily picked off; simply pull on the crane above their heads to knock them out simultaneously.

Once the area's clear, follow the waypoint to the doors and yank them open. Investigate the map on the right wall of the office to unlock the locations of Demon Warehouses across the city; hunt these down and clear them out for Base Tokens. Examine the desk to find a clipboard. You can then exit the office for a short scene in which you're introduced to your next opponent: a Demon that dual-wields whips. Throw objects from the environment at the Demon to stun him (Perfect Dodge is also helpful here), then combo. You can also shoot him into the wall if he's knocked close enough to trap him in a web, quickly concluding the battle. Defeat the large group of Demons that follows for a scene, ending the mission.