Follow the waypoint after Yuri calls to find the bank under attack from the Shocker. It appears the Shocker's gear has been upgraded, but fortunately, Spider-Man has plenty of space to swing around and avoid his new and improved attacks. His most frequent attack is a beam of electricity, which you should recognize from your pursuit of him in a previous encounter. This one is tougher to dodge, especially if there isn't much distance between Spider-Man and the Shocker, and is made worse by his follow-up attack: a giant field of electricity that surrounds him. Rectify this by swinging around the building, far away from the Shocker. Before he summons the field of electricity, he'll hover to your location; as long as you keep swinging, you should be able to avoid this as he charges it. Afterward, he'll be burnt out, giving you the opportunity to attack. 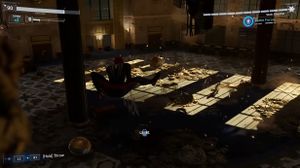 Throw some nearby rubble at the Shocker when he tires himself out.

Throw some rubble at the Shocker by holding

(there should always be some around) after his flurry of attacks tires him out. You can then hit him with a web strike by pressing

and catch him in a combo. Once he returns on the offense, swing away and repeat. After you combo him for the third time, Spider-Man will web the Shocker up, but the latter has another card up his sleeve, and the battle continues. 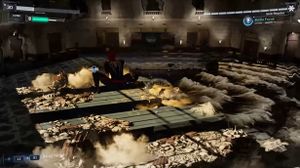 Dodge the Shocker's shockwave attack and throw rubble at him for an opening.

The Shocker has a new attack this time around: a shockwave that shakes the whole building. However, despite its power, the shockwave's range is limited, allowing him to hit only one side of the building. As long as you stay off the ground and swing above the Shocker, you should avoid his shockwave completely. The length of the shockwave attack also doesn't do the Shocker any favors, giving you plenty of time to attack from behind by again throwing some rubble at him (followed by the all-too-familiar web strike and combo). Do this twice to trap the Shocker in the center of the room, which predictably makes him furious. His attacks will be quicker now, though they only consist of beams of electricity.

To clear the final phase of the battle, Spider-Man will have to pull at some of the pillars around the room. Look toward the ceiling and press

when you near one, then rapidly tap

to pull, causing it to crumble. The Shocker will be shooting beams of electricity at Spider-Man all the while, so make sure to dodge regularly in between attempts, even if you have to interrupt one to do so (especially on higher difficulties). Taking down these supports further traps the Shocker, rendering him completely immobile and defeating him for good.