Swing to the waypoint to find Miles getting beat down by some thugs. Defeat them for a scene, after which the perspective switches to Miles. Walk down the street and then head through the farmers' market. At the end of this path will be a blockade courtesy of Sable International. The agents are scanning citizens at the checkpoint, but Miles can skip the check by hacking the drone; aim with

to short it out, after which Miles can jump over the barricade. Continue forward, hiding behind crates and cars to avoid the wandering eyes of the agents to the right. 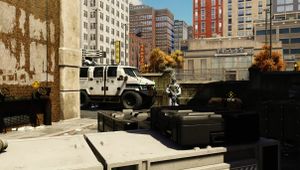 You can hack the vehicle or the drone up above to distract the final agent.

Across the street will be a Sable agent at the ready. Hack the screen that reads "have documents ready" to the left to direct his attention away from Miles, and continue forward. Avoid the eyes of another Sable agent as you jump over the short fence and crawl under the gate (or climb the scaffolding to the right). Hack the electrical object up ahead to short it out and distract the nearby agent, leaving Miles with only one more agent in his path. Hack the car if you're on the ground or the drone if you're on the scaffolding to trick the agent into letting Miles pass, after which he can jump the brick fence to safety.

After the phone call, Miles can enter F.E.A.S.T., where he meets with Peter. After a long scene, exit the building as Peter to conclude the mission.