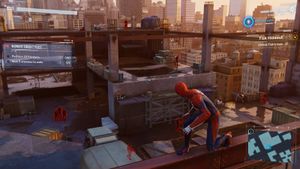 constantly to pinpoint the locations of enemies and remind yourself of the bonus objectives.

Fisk is in his prison, but his goons are still operating all across the city. Swing to the waypoint to come across the first of the hideouts of Fisk's underlings, posing as a construction site. Upon arrival, you'll be able to craft the Impact Web, which instantaneously webs up targets after being shot with

. Open the gadget wheel with

and select the new gadget using

to begin webbing up enemies before they can even know what hits them. Use

to view the positions of enemies as well as the bonus objectives; clearing these bonus objectives allows you to pick up more Base Tokens, which can become a necessity when crafting suits or gadgets. In this case, you'll have to perform 10 Finishers and web 5 enemies to walls; try to get through as much of the first round as you can stealthily, then attempt these objectives when the battle begins. 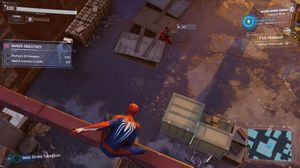 A "safe" enemy is an isolated one. Take them down before they can regroup with their allies.

To get around the area and take down enemies stealthily, watch for the indicators by them; "safe" indicates complete isolation, allowing you to pick off the enemy unnoticed, while taking down an enemy with the "danger" flag causes all nearby enemies to become aware of your presence. Those nearby then alert the rest of the base, bringing in backup and taking away your cover. Try to zip around to different perches using

and get into position for takedowns, but make sure the enemies don't notice you; one enemy across from you is more highly elevated than the others, so chances are he'll notice you zipping around if you stay close by him for too long (if the Spider Sense pops up, this is an indication that an enemy has noticed you; move to a different location before he can pinpoint your location, allowing you to keep your cover). Fortunately, this enemy is also isolated, so you can take him down quietly by pressing

from a perch close by. Take note that when enemies are taken down not too far from other enemies, those other enemies will begin to wander toward their fallen ally to figure out what happened; take this as an opportunity to pick the curious enemies off. Generally, their constant repositioning presents many opportunities for stealth, as long as you're patient.

When Wave 2 begins, either by clearing out Wave 1 or being spotted, you'll have to take down all enemies in battle. Use the Impact Web to web enemies to walls, and use Finishers liberally. The Finisher objective should be made easier by the Advanced Suit's suit power, Battle Focus. Activate the suit power using

and watch as your Focus is continuously restored for as long as the power is active. In the fifth and final wave, watch out for a rocket launcher and grenades. Get to the rocket launcher as soon as you can to avoid being hit by a rocket while fighting other enemies, and as for the grenades, use

to throw them at enemies when you hear them beeping. Even if the grenades sound like they're about to explode, as long as you grab them, they won't do so until they're thrown.

If you don't perform both bonus objectives, don't fret; you can always return to this location to retry for that extra token with new skills handy. You can also feel free to explore the other bases on the map for more Base Tokens before proceeding to the next story mission.

[Go to top]← Something Old, Something New | Fisk Hideout | Landmarking →