Head to the top of the Empire State Building to begin this next mission. Once there, Yuri informs Spider-Man of some police stations in need of assistance. Two precincts are marked on the map; it doesn't matter which you go to first. 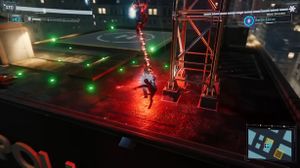 Dodge away from the red light below Sable Jetpacks, as this is an indication of incoming plasma.

The precinct to the left has groups of prisoners firing at cops all across the streets surrounding the precinct. The police barricades that must be defended are marked within yellow squares on the map, and the enemies within them that must be neutralized are represented by red dots within those squares. Once the area is cleared out, the square will disappear and Spider-Man can move onto the next. After all enemies on the ground have been dealt with, turn your attention to the rooftops, as prisoners equipped with RPGs are firing from them. However, before Spider-Man can defeat them all, he will be attacked by Sable Jetpack enemies. Zip to them with

and fight them off with air combos. If possible, try to save Finishers for them as well, as the prisoners are much weaker in comparison. After all prisoners and Sable Jetpacks have been wiped out, proceed to the other precinct, where Electro is wreaking havoc. 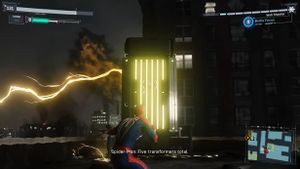 Fire Web Shooters at these transformers to weaken Electro.

Like the previous objective, the targets (in this case transformers that power Electro) can be found within the yellow squares marked on the map. Demons attempt to defend the transformers, though defeating them isn't necessary. Hold

to aim and tap

rapidly to have Spider-Man fire his Web Shooters at the transformer until it explodes. Repeat this pattern for the transformers scattered across various locations on the map (most on rooftops, though one can be found on the ground beside the precinct). Once these have been destroyed, turn your attention to the helicopter flying around the area, transformer in tow. Hold

to slow down time once Spider-Man has gotten close enough to it, then fire away to destroy it. Now all that's left is to assist the police in defeating the remaining Demons on the ground.

After both precincts have been defended, head to one last waypoint for a scene that concludes the mission.