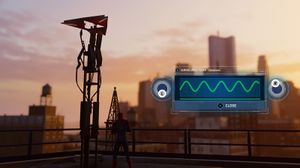 Adjust the positions of the analog sticks to match the wavelengths.

Shortly after exiting the lab, Spider-Man receives a call from Yuri. Follow the waypoint to the roof of a police precinct. After the scene, you'll have to work on getting the surveillance tower back online. Press

; match the height and speed of the frequency to activate the tower. This will make all crime data available to Spider-Man, allowing him to stop unlawful activity as it happens. Start by following the red waypoint. 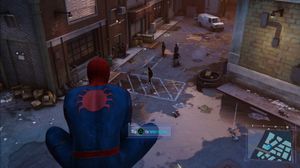 Interrupt the crime in progress to earn a Crime Token.

After a scene, make your presence known with a Web Strike. Some of these thugs are equipped with crowbars, which they can use to block Spider-Man's melee attacks; this is yet another reason to make frequent use of the Air Launch. After clearing out the group, you'll earn your first Crime Token. Following this crime will be an assault; locate it using

and follow the waypoint to stop the next crime, though this one will be a bit more difficult, as the group of thugs contains a brute. Brutes are unaffected by direct melee or even Web Strikes, so you must earn your chance to deal damage to them with a combo by first stunning them. The game suggests using Spider-Man's Web Shooters to incapacitate the brute, but this can be difficult due to the large group of enemies standing in the brute's way. Instead, try to stay above the ground (where the brute can charge at you) using air combos, swings, and Web Zips, then throw objects from around the environment from the air. After stunning him, you can land a combo on him before returning to the air and throwing another object.

Once all enemies are cleared out, the assault victim will be caught in a hostage situation. Direct

to the target over the gun and press

to disarm the thug using Web Shooters before time runs out. Following a scene, you'll have to climb to the top of a building before proceeding to the next surveillance tower. Again, match the wavelengths using

to get the tower back online. This time, you'll receive a backpack icon on the map. Use

to locate it and approach it to find an old relic of Spidey's past. You now have access to all crime and backpack locations in this area; find more surveillance towers to access more parts of the map, making hunting down tokens a whole lot easier.

The next step in this mission is stopping a robbery, this time requiring Spider-Man to deal with gunmen. Use

to dodge whenever your Spider Sense indicates incoming gunfire. Some backup thugs will arrive in a vehicle, but these are also easily dealt with. Proceed to the next surveillance tower to clear the mission and gain access to all other surveillance towers. Make sure to activate them whenever you come across them to obtain the locations to a variety of token opportunities, though only backpacks are available for now.

[Go to top]← My OTHER Other Job | Keeping the Peace | Something Old, Something New →