Head to the waypoint to begin the mission. After a scene in which Spider-Man hitches a ride to Rikers Island, you'll receive your first objective. 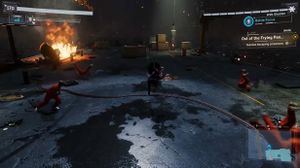 Throw objects with the Hazard Zone skill to quickly knock back the prisoners.

Throwing objects should distance the crowd from Spider-Man, especially if the Hazard Zone skill has been unlocked. This then gives him the opportunity to use gadgets, such as the Web Bomb or Electric Web. Make sure to zip between distanced enemies and initiate air combat to keep the convicts from getting a hit on Spider-Man. After this group is dealt with, you must zip up to a convict with a rocket launcher, knocking him off his platform and eliminating this pesky factor from the battle. More rocket launchers, as well as gunmen, can be found on the ground, though some are kept distracted by the police officers that have been called in to handle the situation. 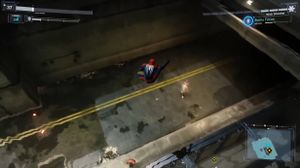 Attack in the air when dealing with unarmed prisoners, via either gadgets or air combos.

To incapacitate the gunmen, use a Spider Drone or similarly effective suit power (such as the Classic suit's Web Blossom or the Stark suit's Spider-Bro). They can quickly deplete Spider-Man's health if they aren't dealt with quickly, so make sure to focus on them while they're distracted. Unarmed convicts can be handled easily by being webbed to walls or, if the gunmen have been dealt with, engaged in air combos. Proceed further into the compound to find yet another group of prisoners, also equipped with rocket launchers and machine guns. Once they've been dealt with, Spider-Man is instructed to zip to a rooftop. 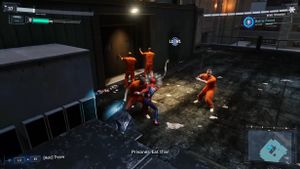 Grab this fuse box to give the prisoners an electric shock.

Some prisoners here are attempting to get to a guard that's hiding in an elevator. On the wall near the elevator is a fuse box that Spider-Man can grab with his webs; throwing it gives an electric shock to everyone in its radius, providing a brief reprieve from the attacks of the crowd. Trap the prisoners near the wall with webs, and weaken the rest with combos. After the scene, Spider-Man has some more prisoners to deal with, this time with some Brutes thrown into the mix. This group is followed by another containing prisoners with shields. Once all groups of prisoners are defeated, a scene follows in which Spider-Man enters the prison.

Fight through the cell block[edit] 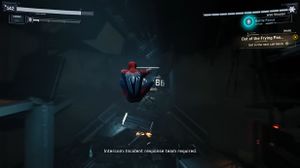 Pursue the villains by zipping through the destroyed prison.

This group of unarmed prisoners, despite their potentially overwhelming numbers, can be dealt with easily. The Blast Off skill, which knocks back nearby enemies following an Air Launch, should prove helpful in initiating air combat. Proceed to the second level after the group has been defeated, using

to open the door at the end of the path. Behind this door is Rhino, who has joined Electro in escaping the prison. Pursue them by zipping to some platforms and through another door. After another scene, Spider-Man must fight off some more prisoners, this time equipped with stun rods and riot shields. Dodge under the shielded prisoners and launch the armed prisoners into the air to defeat them, throwing around nearby objects to stun them if necessary. After defeating them and proceeding through another door, dodge Electro's blast. This triggers a chase with Electro.

Catch up to Electro and stop him[edit]

Run up the wall ahead and press

once Spider-Man reaches the top to have him swing outside with some momentum. Swing around the building to keep up with him. Approach him once he stops for a scene, and the chase continues. In this phase of the chase, Spider-Man will have to dodge some of Electro's attacks to avoid taking damage and being slowed down. Approach him once again for another scene, after which the third phase of the chase begins. Run up the wall, dodging to the side whenever some debris drops in Spider-Man's direction. Reaching the top triggers the scene that concludes the mission.