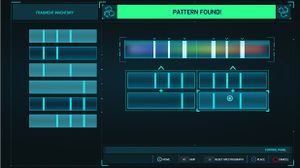 The solution to the spectrograph that allows Spider-Man to track the dangerous substance.

by a subsequent waypoint to investigate the sign on the ground. Rotate it and press

to examine the substance on the back. This leads into a spectrograph puzzle, the solution for which can be found pictured to the left. This allows Spider-Man to track the substance across Times Square. Follow the path to the right, then make a left turn at another fork. It should lead up a building, which Spider-Man can scale by wall-running. Cross to another building and the path should end on its roof. Enter the vent to find Otto's lair.

to scan for a fuse box and shoot it with an Electric Web to turn on the lights. Investigate Mister Negative's mask nearby, as well as the letter and tape recorder on the table. Investigate the table next to it to find some of Otto's work, then proceed further into the lair. Straight ahead down the stairs is another recorder, and to the right of it, some Sable tech that can be examined. Continue through the lair examining the many materials used by Otto in his plan to unite the villains of Spider-Man's past. Use

to assist in locating every item worth examining. 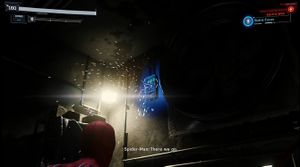 Activate this fuse box in a corner of the lair to reveal the secret map.

Eventually, Spider-Man will come across a map of the city. Look at it with

and examine it with

for Spider-Man to point out that there must be more to the map. Exit the close-up of the map with

to turn Spider-Man's attention to the U.V. bulb propped up on the briefcase. Try activating it with

and Spider-Man will notice that the power isn't on. Scan for the power lines with

to pull off the cover of the fuse box, and shoot an Electric Web at it to turn on the power. This should reveal some writing on the map. Examine all X marks, then return to the entrance of the lair and press

at the briefcase as instructed for a scene. 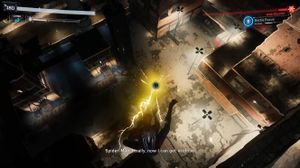 Use the Web Shooters to weaken Electro, giving Spider-Man the opportunity to combo him.

prompt will appear, allowing Spider-Man to perform a web strike that opens up Electro to a combo. After this sequence, Electro stations himself atop a transformer, allowing him to channel his electricity into harmful beams that spread out from his location. Shoot up the transformer to cause it to explode, interrupting his attack and causing the Vulture to arrive for assistance. 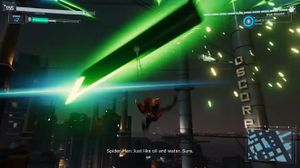 Throw the Vulture's missiles back at him for an opportunity to attack him.

Dodge the Vulture's charges and throw the missiles that he shoots in Spider-Man's direction back at him in order to open him up for web strikes. Continue this sequence until Electro re-enters the battle, requiring Spider-Man to fend off both villains at once. Focus on the Vulture first, dodging Electro's electricity even if you must interrupt your combos to do so, and then turn your attention back to Electro, shooting webs at him and the transformer he selects to weaken him. This leads into a QTE sequence, after which Spider-Man must go right back to fighting both villains. Repeat the same strategy in order to defeat the villains for good.