Follow the waypoint to a building near Oscorp Tower to begin the mission. Follow the subsequent waypoint to the glass roof overlooking Oscorp Tower's entrance, which is where Spider-Man can begin tracking the wiring of the building. Press

to reveal the wiring, and climb up the building to follow it to the first security module straight ahead. Hold

until Spider-Man finishes the hack, after which you can begin following the next set of wiring. Some snipers will now have their lasers pointed at the building, so make sure to avoid them as you climb (or run) to the right side of the building, where the second security module is located. 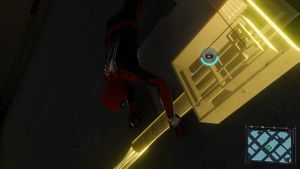 Follow the building's internal wiring to find four security modules that can be hacked into.

The hunt for the third security module is prefaced by the arrival of some drones, equipped with spotlights. These are more difficult to avoid due to the range that they cover, so make sure to mix in some wall-running by holding

in order to dodge any that get too close. Follow the wiring further right to the third module and hack into it to trigger yet another security measure even more extreme than the last: a helicopter, circling the building and equipped with a massive spotlight. Run left to the fourth and final security module, located inside the "OSCORP" logo on the building. The vent that is unlocked due to Spider-Man's hacking efforts is not far from here. Climb to it and use it to enter the building.

to find your target, as the vents can be pretty dark depending on your brightness settings). After listening to the discussion below, drop in and approach the computer. Scroll through the slides with

for some eye-opening information. Spider-Man calls MJ about it afterward, leading into the next mission.