Jefferson Davis calls Spider-Man to kick off this mission. Some Demons have invaded one of Fisk's construction sites in midtown, so follow the waypoint there to begin handling them. Again, you have the option to do this stealthily. While a stealthy approach is recommended on higher difficulties, it isn't required. 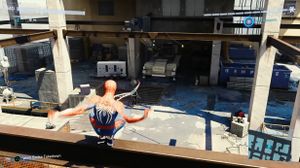 Pull the crane down onto this Demon's head to knock him out.

To pick them off quietly, zip to the platform ahead and perform a takedown on the Demon that walks past. Zip to the scaffolding up ahead, slightly to the left, for a good view of your next target, also isolated and ready to be taken down. Another Demon isn't far from this one, so as long as you take down the first quickly, you can take down the second just as easily. Ahead is a group of three, which you can separate by firing Web Shooters at distraction objects. When only one is left, you can use

to bring a crane down on his head, knocking him out.

Once all enemies in the area are taken out, Spider-Man will hear some gunfire, and you'll receive a new objective. 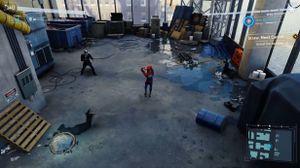 Combine a Web Throw with one of the objects in the environment for some crowd control.

Zip or crawl through the hole in the structure, in the direction of the waypoint. A short scene shows a scuffle between a Fisk thug and a crew of Demons. Once Spider-Man moves the Fisk thug out of the way, the fight begins. There is one unarmed man to the left, a man with a shield, and two gunmen. You should have the Perfect Dodge skill by now, allowing Spider-Man to web the gunmen in the face if he dodges their gunfire at the right time. This stuns them momentarily, allowing you to dodge under the man with the shield and knock him out. You can also web the gunmen up (using Web Shooters, Impact Webs, Electric Webs, or a Web Bomb) or hold

to grab an object from the environment and knock everyone back with the Hazard Zone skill.

After the fight will be a short scene, and after that scene is a new objective. 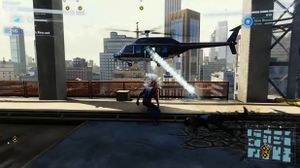 The helicopter attacks once all enemies in the second group are defeated, leading to the third group.

Six waypoints lead to six different locations where Spider-Man must defeat the invading Demons and rescue Fisk's men. The closest is directly to the left of you, where many Demons (including gunmen) are spread out. Reinforcements may arrive through a door to the back of the area. Use the wide open area to your advantage, isolating goons that try to crowd you. The next closest location is directly across to the opposite structure, on the same level. Again, there's a door that reinforcements can enter from, but there aren't too many Demons to deal with here. The helicopter also has a good view of Spider-Man here, but ignore it for now and defeat all the enemies. After the fight, the gunman in the helicopter shoots rockets in your direction, causing the floor to collapse beneath you. Dodge the rockets and drop down through this new hole in the structure to find the next group of Demons. 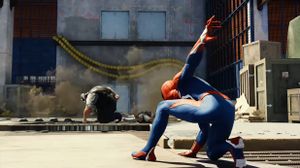 The defeat of the Demons on the bridge is followed by the arrival of a Demon Brute.

The third group consists of two men with shields and two gunmen; again, utilize your gadgets and the environment to control the crowd. The fourth group can be found on a bridge between structures, which itself can be found by climbing up the side of the building. This group isn't privy to the presence of Spider-Man, leaving them open for a surprise attack (while a stealth attack is technically possible, it can prove difficult and time-consuming due to the group's number and proximity). Once this group is defeated, a Demon Brute will drop from the helicopter, demonstrating a shockwave attack. Use gadgets to web the Brute up, giving Spider-Man the opportunity to attack him up close. If he falls, you can finish the battle quickly by webbing him to the floor or the wall. Some more Demons will attack afterward, but they shouldn't be a problem by this point. Defeat them to move on.

The final two groups can be found on higher levels in the structures. At the lower of the two waypoints is a small group of four that is easily dispatched. At the higher of the two is another group of four, and though they are better equipped than the previous group, they can be caught by surprise. What follows the defeat of both groups is a scene and a QTE; press

three times to web the crane up, then

to attach it to the building and halt its potentially catastrophic descent. 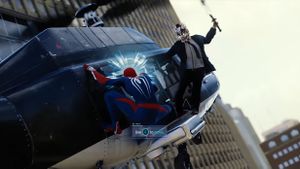 Swing after the helicopter to avoid losing it. The occasional rocket will be fired your way, which you can dodge mid-swing before continuing the pursuit. Follow it long enough and a

prompt appears, allowing Spider-Man to zip to the helicopter. After a scene, run through the building, holding

to parkour over some obstacles and pressing

whenever the Spider Sense indicates danger. Once you reach the end of the building, press

to finally kick the pesky rocket-firing Demon out of the helicopter.

rapidly to do some serious damage, then move to the other side and do the same. A QTE follows, and then a short scene introducing you to Miles, the son of Jefferson Davis. This concludes the mission, and leads immediately into the next.