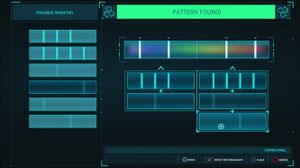 This is the solution to the spectrograph that allows Spider-Man to analyze the poison.

Swing to the waypoint in Central Park to trigger the scene that begins the mission. Your first objective is to reach higher ground, so swing along the trees and then the buildings to the waypoint. Solve the spectrograph (the solution can be seen in the image to the left) to be shown the next waypoint. Make big swings across the cranes, then zip across the buildings. The Point Launch Boost skill may come in handy here. Enter a greenhouse to trigger the next scene, after which you can enter what is seemingly Octavius Industries. Chase after the illusion of Otto until you can finally grab the plant. That ends this dream sequence, but takes you write back to the streets of poison. 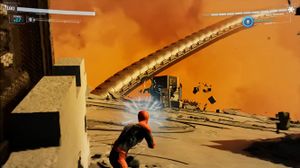 Fire webs at any Scorpion to open him up for a combo.

Swing to the next waypoint, staying high and dodging the scorpion tails that are now popping out of the poison, to trigger another sequence in which you must chase Otto. After Spider-Man finally grabs what he came looking for, you'll have to swing to another waypoint, this time representing the real Octavius Industries. After entering, chase Doc Ock to trigger a mini-boss fight. Fire webs at the Scorpion until he's incapacitated, then zip to him and combo him until he disappears. Follow him to the next location, where the real boss fight begins.

Fire webs at any Scorpion, then zip to him and combo him before moving onto the next. You'll have to dodge some poison and scorpion tails in between combos, as the other Scorpions will continue to attack as you're focusing on another. After defeating them all, interact with the lab equipment and Spider-Man will be rid of the poison at last. Exit the lab to conclude the mission.