Follow the next waypoint to Fisk Tower. After a cutscene, you'll find yourself inside the building. Swing toward the group of enemies up ahead and use

to start fighting them. Air combos should prove helpful here, but if your health does end up running low, make sure to press

to transfer any acquired Focus to the health bar. After clearing out these thugs, you can press

to zip to the next group. After defeating a couple of these guys, some more will come pouring out of the elevator. All of these thugs are carrying firearms, so it can get a little tough for a point so early in the game, but just make sure to use

whenever possible, even if you must interrupt a combo to do so. 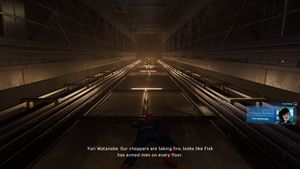 Climb (or run) up the wall to reach the vent at the end of the shaft.

After a cutscene, simply approach the elevator wall to climb up it. If you're looking for a speedier approach, hold

to wall run and

to zip forward. Once you reach the top of the shaft, press

to get through the vent. Upon reaching a dead end in these narrow tunnels, you can continue by approaching the wall to climb it. Follow the path until eventually, you come across another vent, which you can use

to drop down through. Zip to a balcony where enemies can be found shooting at the police officers down below and clear them out, making sure to dodge their powerful guns in the process. The next group of enemies won't be as tough due to a lack of firearms; simply fill up your Focus bar and use

to take them out quickly with finishers. 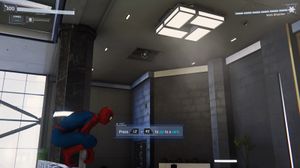 Make your way into the Server Room through this vent.

Once all enemies are dealt with, zip to the next balcony to find yourself face-to-face with the Server Room. Pressing

will reveal that plenty of enemies are roaming around inside. Instead of confronting them head-on, turn to the left and look up at the ceiling to spot a vent that you can zip to. Crawl along until you come across the first vent; pressing

will cause Spider-Man to take out an enemy stealthily. Afterward, continue on to the next, which you can drop down through. After dealing with the enemies, access the computer with

for a scene. Some more enemies will come rushing in to deal with Spider-Man, though only two by the doors have guns. Exit the room and zip up to the next floor through the gaping hole in the ceiling. 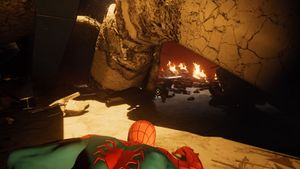 The civilians furthest in can be found beneath some rubble.

After defeating a group of three thugs, one of which is equipped with a handgun, zip to the next floor for a short scene. The bomb squad instructs Spider-Man to rescue trapped civilians while they search for bombs, so zip toward the fire to begin your search for innocents. Enter the area to find a beam blocking a couple of people off from the exit. Use

to move the debris out of their way, and they'll let you know that there are some more civilians trapped further inside.

Follow the path to the left, where you should see your path forward blocked by a ton of rubble. Spider-Man can squeeze in through the right to find the remaining civilians. After crawling to them, Spider-Man will offer to lift the rubble up, giving them some space to exit. Mash

rapidly and some more debris will come crashing down, but as Spider-Man is undeterred, keep mashing

. Once the civilians are out of the way, continue forward from here. 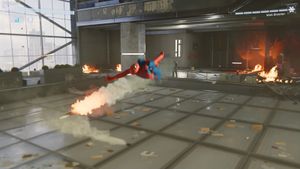 Dodge a rocket before zipping to this enemy.

A vent that you can zip to can be found in a nook off to the right. Climb up a wall in here to continue forward, until you come across a vent that you can drop through. Proceed past the police officers to find out what's giving them trouble: a rocket launcher. Dodge when you spot the target on you and zip to the pesky thug to take him out. Afterward, you'll have to zip a couple more times to deal with even more rocket launchers. Hold

to take out the door that they're guarding, then run through the area using

and Spider-Man will show off his parkour skills. Once you've made it past two staircases, you'll come across some more enemies. Dodge into walls with

to knock back multiple enemies, giving you some breathing room. 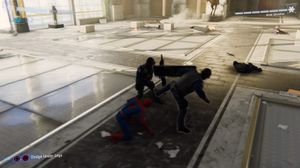 Always dodge under enemies with shields to gain access to their weak spot.

Open the door at the next checkpoint for a scene, after which you're introduced to enemies with shields. After a basic attack or a Web Strike, you can dodge under enemies with

to not only stagger them, but end up behind them, where they're most vulnerable. This skill is invaluable against enemies with shields, but before dealing with them, take out the machine guns that are constantly firing at you; it's difficult to dodge under and combo shielded enemies if gunfire is constantly interrupting. Once all of these enemies are dealt with, you can proceed to the big red doors that lead into Fisk's office. It's time for a boss fight. 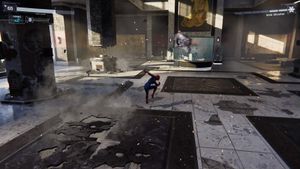 Webbing and subsequently tossing the turrets will grant you access to Fisk.

The first phase of this boss fight is against Fisk's turrets. Dodge their fire until they take a break to cool down; hide behind a pillar and shoot at whichever turret is visible, then hold

to throw it right at Fisk. The throw takes a while to charge, and it may be just enough time for the other turret to cool down and begin shooting again. This is why hiding behind a pillar, out of range of the other turret, is important. Afterward, you can take out the other turret and Fisk will have no choice but to face Spider-Man himself. 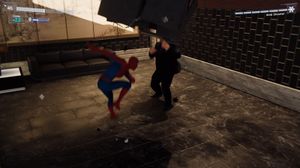 Throw anything at Fisk to open him up for an attack.

Fisk will start by throwing a large chunk of concrete at Spider-Man. Hold

to throw it right back at him, then approach him with

to begin a combo. Step away from him after concluding the combo, as attacking anymore than that will cause him to retaliate. Keep in mind that you don't have to wait for Fisk to throw debris at you for an attack opening here; you can throw whatever is in your range at Fisk to speed up this phase of the fight. After a scene, you'll move to the next phase, which is the same as this one, albeit with Fisk's thugs surrounding him. Make sure to take them out with air combos so as to keep out of reach of Fisk, and if you ever need some distance, remember that you can swing far above these enemies.

After enough throws and combos, a short QTE sequence will begin, though it doesn't actually require precision; press

repeatedly to combo him in the air. This will finish Fisk off for good. After the mission, feel free to spend your first skill point and roam the city.