Swing to the waypoint to trigger a short scene and a perspective change to MJ. There is currently an exhibition of Oscorp tech at Grand Central, and MJ is intent on investigating any potential point of interest for the Demons. You can examine the news stand to the left upon entering to view a newspaper that features Spider-Man's adventure at the ESU campus as its cover story. Head down the stairs to begin viewing the displays, though the display of interest here is located on a table to the left, at the back of the area. Examine it to trigger a scene. 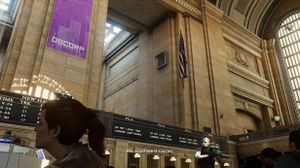 Direct Spider-Man to enter through the southwest vent.

After the scene, MJ will be on the phone with Spider-Man. Press

when prompted to notify him of the drones patrolling the area, then look back and to the right, to a high vent that Spider-Man can enter through. Once MJ mentions the tablet that would allow her to gain control of the drones, direct Spider-Man's attention to the clock at the center of the area. Spider-Man will fire his Web Shooter at it, distracting some of the Demons close by and giving MJ an opening. Sneak between the huddled civilians to the tablet and grab it to trigger another scene, after which you can walk to the waypoint to have the Demon that is leading her away be taken out by Spider-Man. 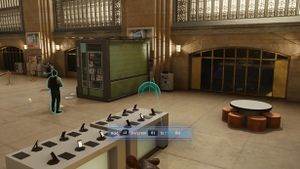 Aim the lure behind the news stand to separate the Demons, allowing Spider-Man to take them out.

Do as Spider-Man says and jump over the railing ahead. Head up the stairs to the left or right to avoid crossing paths with the Demon in the center, and continue up to the balcony, where MJ will shut down the drones. After the scene, aim the lure behind the news stand, in the range of the closer Demon. He will then follow it behind the news stand, away from the farther Demon, making them both safe targets. Press

to direct Spider-Man to take them out before continuing down the stairs. Before proceeding to the ground floor, toss a lure (to the left or right, behind a screen) to separate the two Demons down below, and again, have Spider-Man take them both out. 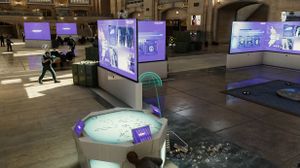 Lure this Demon closer to MJ to make him a safe target for Spider-Man.

Back on the ground floor, there should be a lone Demon patrolling the center area between the screens. Have Spider-Man take him out quickly, as he may walk away before he can (though he will wander back eventually). To the right are two more Demons, one behind the other. Have Spider-Man take out the one with his eyes on the other first, then the other. Walk through the center to now deal with the Demons to the left, with the first target standing guard straight ahead. Lure him closer to MJ (this may take two lures) to distance him from the other Demons, allowing Spider-Man to take him out. Move up to the cargo to the right of the clock to begin taking on the next group.

There should be a pair here, one standing directly beside the cargo and the other closer to the stairs. Toss a lure toward the stairs the latter Demon turn his back on the other, giving Spider-Man the opportunity to take the other out. You don't have to bother with the distracted Demon, as moving to the cargo ahead triggers a scene. As the Demons have their discussion, look toward the screen and press

to have Spider-Man create a distraction. MJ is now free to move back toward the hostages, where the dangerous device is located. Examine it to begin disabling it. 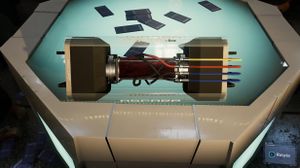 Follow the path of the colored wires to the right to disarm the bomb.

You will first have to remove the two blue wires, then the yellow, and lastly, the red. Rotate the bomb to determine which wire's end matches to its start, a task that may prove difficult due to the fact that all wires appear the same in the center. After unplugging the second blue wire, the timer will suddenly leave MJ only thirty seconds to unplug the others. The red wire maintains its color in the center, leaving only one black wire still plugged in for the fan, so these last two wires should be no trouble at all. Once the bomb is disarmed, the perspective switches back to Spider-Man, perched high above the remaining Demons on patrol. 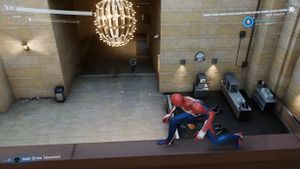 Watch for enemies that wander onto balconies after they've been cleared.

You can use distraction shots from the Web Shooters for a slower approach, or Impact Webs to take out the enemies on the center balcony quickly. Then zip to the American flag to the right to begin taking out enemies on this balcony. There should be an isolated one nearby that can be taken down easily, and a pair standing by the door; use Impact Webs or a Trip Mine to take them out. Another Demon may wander onto this balcony by himself, so make sure to stick around for an easy target.

On the balcony to the left are two enemies standing over, and two under. You can separate either pair with a Trip Mine, and then follow the other pair as they separate naturally and become safe targets. Another enemy may wander up the stairs on his own, so again, stick around to take him out before moving to the center. Only a few enemies should remain, and when they split, they should become safe targets as they move behind the many screens, out of sight of the others. If not, Trip Mines are your friend. Once enough enemies are taken out here, the battle will begin. 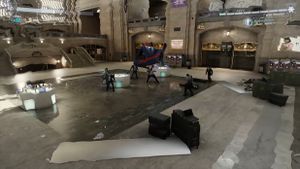 Back away and use gadgets when overwhelmed by a group.

There are plenty of tricky enemies to look out for here, including Brutes that create massive shockwaves upon pounding the ground. The Perfect Dodge skill is a great help in stunning the enemies, especially those that cannot be attacked directly. As for enemies that can be attacked directly, draw them away from the group with Swing Kicks and air combos. Objects from the environment are also great tools to utilize in stunning a group, especially with the skills Hazard Zone, Wrecking Ball, and Collateral Damage. Unique to this area are the giant screens which Spider-Man can pull down onto nearby enemies.

After fighting off the initial wave, you should notice some rocket launchers on the balconies. Zip to their locations and take them out, then follow Mister Negative to the trains for the final showdown. 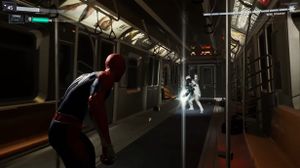 When Mister Negative takes this stance, dodge to the wall of the train.

Approach Mister Negative to trigger his offense; dodge and perform a combo of your own to knock him back. He will continue to fight back, so repeat the pattern until his back is up against the back of the train, in which case Spider-Man will knock him into the next car. Mister Negative, now powered up, will change up his attacks, this time sending a blast of negative energy down the center of the car. Dodge to the left or right side of the car with

and perform a combo. Afterward, Mister Negative will add an attack in which he launches both hands forward, creating a blast of negative energy that covers the floor of the whole car; press

to dodge to the ceiling, then combo again to have Mister Negative again send blasts of negative energy down the center of the train. Dodge until you can combo once more to proceed to the next phase. 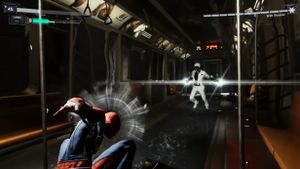 When Mister Negative moves both hands back, dodge to the ceiling.

After a scene, Mister Negative will use both variations of his burst attack (down the center and across the entire floor of the train car), requiring you to watch his hand movements in order to determine whether to dodge to the walls or the ceiling. If he moves his hands to the side, one behind the other, then dodge to the wall. If he moves both hands back without changing his stance, dodge to the ceiling. Once these attacks are over, Mister Negative will begin to create a wall of negative energy. Zip to him and perform a combo before backing away to avoid his next attack. This phase of the battle will have to be repeated one more time before a QTE triggers that signifies the nearing conclusion of the battle. Press

to punch Mister Negative before he can punch Spider-Man, and

to send him flying into the front of the train.

In a scene mirroring Spider-Man 2's train scene, Spider-Man attempts to forcefully stop the train with his webs. Alternate between

rapidly for a comment in which Spider-Man references the scene, then press

rapidly to conclude the QTE. Mister Negative has now been defeated, but there's still plenty for Spider-Man to do in New York City, including stopping Crime, performing Challenges, and clearing Bases. Completing this story mission also unlocks the side mission Error: File Not Found, located in Hell's Kitchen. Take note that this is the last side mission to be unlocked through the story.

[Go to top]← Collision Course | The One That Got Away | Breakthrough →