Swing to the waypoint in Central Park to begin this mission. The perspective switches to MJ, who's sneaking around the Sable base in the hopes of finding Standish. She is now equipped with lures that allow her to distract enemies, and the very first guard in her path will serve as a tutorial for this feature. After aiming with

, toss it into the marked circle with

to hurry past the enemy, toward the first waypoint. 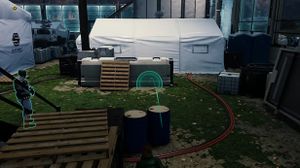 Make sure the enemy you want to distract is highlighted green before throwing the lure.

Move behind the cover to the left to avoid the gazes of the two Sable agents here. By the time MJ reaches the other side, one of the agents will have walked away, but the other is still standing by the stairs that she must use to reach her destination. Throw a lure to cause him to abandon his position, and head up the stairs to reach the second waypoint. Take a photo of the large screen before continuing to the other waypoint, which triggers a short scene. Continue down the first set of stairs and drop off the platform before the second set to avoid Sable agents. There's a generator with a

prompt that can be turned off here, killing the lights and causing confusion among the agents. Hide behind the left side of the generator before an agent approaches to check on it, and enter the tent that he was previously guarding the entrance of. There's another Sable agent to the left here, so make sure to stay on the right side as you make your way to the exit. 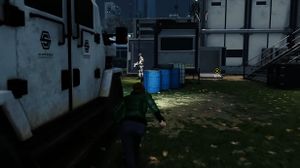 Use the moving truck as cover to the stairs.

Back outside, you should spot a speaker icon to the left. Approach it to have MJ tip over the toolbox and distract the nearby agent, allowing her to enter the empty shipping container and exit on the other side of the compound. The truck nearby will then begin moving; hide to the right side of it and follow it as it moves, bringing you closer to the next waypoint. Head up the stairs here and knock over another toolbox to distract the agent to the right, allowing MJ to cross to the left and toward the stairs (there's another Sable agent near the stairs that you may have to distract with a lure). At the bottom of the stairs, take a photo of another screen and approach the generator ahead. Press the button to cause the agent to the right to move left, allowing MJ to use the cover to the right (where there aren't any agents standing guard).

Continue along the path to the right, past the agent facing the truck and even further right to avoid another pair of agents to the left. Eventually, you should come across a pair of agents who are passing by and a lone agent standing guard. To distract the lone agent, toss a lure to his left, and continue right, around the tent. Circle the tent fully to find its entrance and trigger a scene (you may need to wait for some agents to pass by before entering). After the awkward scene, Spider-Man will be given some time to complete side activities. This includes a newly-unlocked Side Mission, Snipe Hunt, located in the Financial District.