Head to the waypoint to aid the police in taking down the surrounding Demons. Once they're all knocked out, press

to open the garage door and make your way inside. Run to the fallen cop and press

to interact with him. He fills Spider-Man in on the situation before more Demons arrive to attack. From this point on, Demons will be scattered along the path to the basement. Gadgets and suit powers can be a big help in defeating them, and constant dodging is a necessity. Once this massive group is defeated, another group (including a Brute) arrives via elevator. Use Web Shooters or a Perfect Dodge to stun the Brute and attack. The defeat of this group concludes the waves of Demons, for now. Open up the elevator doors to begin the next phase of the mission. 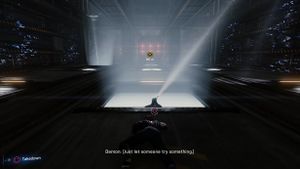 Take down the watchful Demons in Spider-Man's path by sneaking under them.

Spider-Man will now begin climbing the elevator shaft, which is of course littered with enemies. You must avoid their flashlights as you make your way up, though Spider-Man isn't completely helpless; you can sneak up under gunmen and press

to pull them out of the doorways that they stand in, removing them as threats. Ascend to the top and zip to the vent, then exit through another vent to begin progressing up the next elevator shaft. There will be some elevators moving up and down here, blocking your path to the vent at the top. Wait for it to drop and run through the gap it leaves, then zip to the vent. Running may alert some enemies, so make sure to escape quickly.

This next vent leads to the final elevator shaft, where flaming bombs are tossed down in Spider-Man's direction. Run up the wall and hide under the cover between elevators to avoid getting hit. Elevators also act as obstacles here, dropping at a rapid pace so that they hurt Spider-Man if they make contact with him. Making a run for the vent is the best strategy here.

There are plenty of Demons keeping guard here. Fortunately, Spider-Man can take them all out stealthily. To start, there are two walking by; take out the one behind first, as the one in front won't notice. Zip to the right side, toward the office where Mr. Standish is held, to find an isolated Demon in the hall, and another by the office. 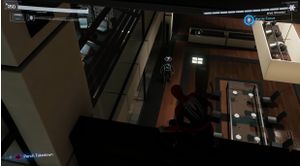 Split up the group by the windows with a distraction from Spider-Man's Web Shooters.

Down on the first floor are a couple more Demons walking around on their own (you may need to wait before they lose sight of each other before taking them down), and a group of three by the windows. Ignore the trio for now, as reinforcements should be entering the penthouse by now. Wait for the two by the entrance to split from each other, making them safe targets. You can also take out a Demon in the hall on the path to the office and another standing right by the office once more. The trio by the windows should now be the only Demons remaining. Fire a shot from Spider-Man's Web Shooters by the dining area to draw one of the Demons away from the others, then take him down. This leaves only the pair, still unwilling to split from each other. You can fire another Web Shooter shot at the chandelier above them to finally draw one away from the other; take down the Demon that stays behind, as the other Demon should now have his back to him, then take down the final Demon. With that, Spider-Man deems it safe to enter the office; attempt to do so for a scene.

You must now do battle with a Demon Swordsman, whose sword is powerful enough to send beams of negative energy in your direction. Dodge one of his massive attacks at the right time for an opportunity to combo him. Some reinforcements arrive shortly afterward, but ignore them for now (except to dodge their attacks) and focus on the Swordsman. You can also use a suit power (such as the Classic suit's Web Blossom or the Stark suit's Spider-Bro) or gadgets (such as the Electric Web or Web Bomb) to subdue the crowd. Once the group is defeated, you can finally enter the office to speak to Standish. Complete the short QTE to finish the mission.