When Yuri calls about some of Fisk's thugs at a shipyard, follow the waypoint to begin taking them down. You begin on a perch, with a sniper on a roof stationed directly in front of Spider-Man. Zip to the roof to perform a web strike on the sniper, who, like most other snipers in the area, is a safe target due to his isolation. Zip to the roof across from this one (to the right) to find a thug stationed behind a sniper. The man behind the sniper should be a safe target, but if not, scan for distraction objects with

and fire the Web Shooters at one to separate them. Take them both down, then zip to the roof across to take down the lone sniper there. Turn right and you should be able to see the final sniper, stationed high up in a tower gated on three sides. Zip to the roof beside it, and then climb up the front of the tower for a clear shot at the thug. 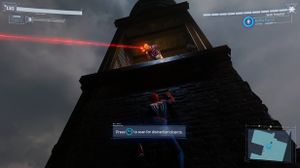 The sniper here can be taken down by climbing up the front of the tower.

Now there are only the guards on the ground to deal with, armed with flashlights which may make this more difficult. From the tower, turn to the left side of the area; at the edge of the yard should be a lone guard. Take him down, and then zip back up the building nearby; a guard will walk up the walkway and back, and you should be able to take him down stealthily at some point. Back on the right, there are two guards that can be taken down, one after the other. Following these take downs, the remaining guards will be on alert, causing them to split up in order to look for their missing colleagues. Take down the rest as they wander off, using distraction objects if necessary and maintaining patience. If the guards catch Spider-Man, this segment is all the more difficult, but still doable.

Once all the guards are dealt with, a police officer will arrive on the scene, giving you your next objective. 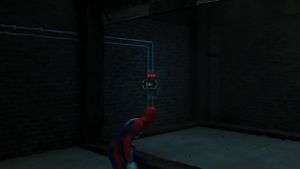 The final junction box is hiding behind an elevator that can be pulled up.

Find a vent on the roof that you can use to enter the building. Approach the locked door, and after a conversation with Officer Davis, Spider-Man can craft a new gadget: the Electric Web. Hold

to unlock it, then shoot it at the junction box to the right of the door. After a short scene, Davis finds what could be a hidden room. Shoot the junction box on the floor above it with the Electric Web to unlock it. While it turns out to be a dead end, you can look for similar scrapes to find something more. On the second floor, to the right of the entrance (facing the doors), is another door. Bring Davis up to the second floor by cranking the elevator (hold

to find it on the ceiling on the other side of the building, and again, shoot it with the Electric Web to activate it. After discovering what's inside, Spider-Man will have to look for a second junction box. Follow the wiring back down to the first floor, to a junction box behind an elevator. Use

to wind up the cog above it, pulling the elevator up and allowing Spider-Man to shoot the final junction box. 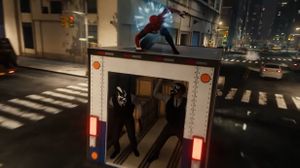 When the Spider Sense pops, dodge to the side of the truck and attack.

to help Davis lift up the trap door and enter the secret passageway. Crawl along the left wall, pulling a boulder out of Davis' way in the meantime, before moving to the ceiling. Hang from the ceiling with

when prompted and press

to zip to the ground ahead. Investigate the points of interest with Officer Davis, then approach the doors at the back of the room and press

to peek outside. Defeat the many demons standing in your way before pursuing the truck; demons will be firing out of the back, so make sure to press

when close enough, and when the Spider Sense pops, move to a side of the truck with

, after which you can press

as soon as the driver starts shooting to snatch the gun out of his hand.

When the trucks collide, aim with

to do damage control. Press

repeatedly afterward to lift the truck back onto the bridge. A scene follows, after which the mission is completed.