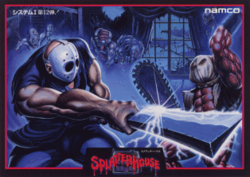 Splatterhouse (スプラッターハウス, Supurattāhausu?) is a beat 'em up arcade game developed and published by Namco. It was the first in a series of games released in home console and personal computer formats. This cult classic would later spawn the parody Splatterhouse: Wanpaku Graffiti, the sequels Splatterhouse 2, Splatterhouse 3, and the remake Splatterhouse U.S., with the classic games being added to Namco Museum since 2017.

Marketing for the game heavily emphasized its violent nature; for example, the TurboGrafx-16 port of Splatterhouse had a faux parental advisory warning printed on the front of the box that read, "The horrifying theme of this game may be inappropriate for young children... and cowards."

Splatterhouse is an arcade-style sidescrolling beat 'em up with platform elements, in which the player controls Rick, a parapsychology college major who is trapped inside West Mansion. After his resurrection by the Terror Mask, Rick makes his way through the mansion, fighting off hordes of creatures in a vain attempt to save his girlfriend Jennifer from a grisly fate. The game is influenced by western horror films, such as Friday the 13th, Evil Dead II, Poltergeist, Rejuvenatrix, and Parasite, as well as imagery inspired by the works of horror writer H. P. Lovecraft such as Herbert West–Reanimator.

Similar to many sidescrolling beat 'em up games, Rick can only move in a two-dimensional environment. He has the ability to jump and can punch and kick. Rick also has a Special Attack, where he will perform a dropkick that sends him skidding along the ground, damaging any enemies he hits. Rick can also perform a low kick, low punch, and jumping attacks, as well as pick up and use various weapons placed in the levels.

All of the levels consist of walking left to right, with occasional auto-scrolling segments. However, alternative pathways through sections of the house are possible by falling down through holes or jumping up onto ladders. In this way, branching gameplay is possible, if only prevalent in the middle levels. Levels culminate in boss fights that take place in a single room.

Unlike traditional sidescrolling fighters, boss fights have varying objectives and styles. Unlike most arcade games in the genre, Splatterhouse sends players back to checkpoints after losing lives or receiving a game over, discouraging "credit feeding" as a method of overcoming the various challenges.

The place was called the West Mansion; but, to all those who had known the legend, it was known as "Splatterhouse". It was once the home of the famed parapsychologist, Doctor West - and there was a research laboratory in the house (where he had conducted some of his most gruesome experiments). It was even said that it was in this house that he created the most hideous creatures that ever walked the face of the Earth, but no-one knew for sure; he had not been seen or heard from in years, and no-one who had ever gone into the mansion had survived to tell the tale. Rick and his girlfriend, Jennifer, were parapsychology majors at their local university - and they were both very interested in the works of Dr. West, as he was the most famous parapsychologist in the world. One day, they decided to visit the abandoned mansion, as part of a project they were working on in school; as they walked towards that mansion, it started to rain. They entered - all went dark. Lightning cracked through the sky; there was a frantic scuffle. Then a scream - and suddenly Jennifer had gone. Rick's unconscious body was covered with blood; hours later, he awoke to a fantastic horror. He was alone, and also drenched with blood, but the most terrifying thing of all was that a hideous mask was covering his face - he had read tales of this mask (known as the "Terror Mask"), in Dr. West's writings. It was said to possess ancient spiritual powers; as his only hope, Rick must now depend on this mask, to grant him the strength and courage to find Jennifer. He has a total of seven stages to clear - and each one is gorier than the last.