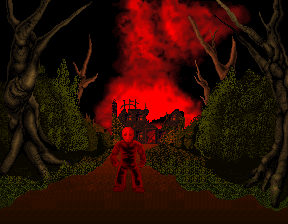 Namco's Japan-only 1988 beat 'em up arcade game, Splatterhouse is divided into seven stages, each one gorier than the last; each stage is divided into several sections, which usually have a ladder or door at the end of them. If Rick loses a life, he will restart at the beginning of the section he died on, and the amount of hits Rick can take before losing a life (represented by the "life-hearts" at the bottom of the screen) depends on what the arcade owner has set the "RANK" setting in the options menu to - A: four, B: six, or C: two (and unlike in every other multiple-life-based Namco game before this one, Rick will always start off with three lives, as there is no option to change this). Therefore, if you are using MAME to play this game (which you almost certainly will be unless you are a native inhabitant of the "Land of the Rising Sun"), you may want to set the "RANK" option to B in order to increase your chances of survival; you'll also notice that Rick flashes when he takes a hit, which means that he is temporarily invulnerable, so you should use that effect to your advantage, and get in as many extra hits as you can. It may not last very long, but it can make a big difference for close boss battles - especially the one against Mother, as it will continually spawn Oba during the fight, and the one against Hell Chaos, who will keep trying to grab Rick with his rotting hands.

Rick's most powerful attack (the slide kick) is also the most difficult move to perform in this game; to pull it off, you must jump up while walking either left or right, then push the joystick down into the "south-west" or "south-east" position while Rick is coming down from the jump, and press the Attack Button just before his feet touch the ground. You can use this move to take out several enemies at once and quickly reach the end of a section - but you should make sure that you don't slide right into a trap such as a puddle of acid spat by a Shibito, a "Warp Mouth" with a Monstrous Hand under it, or a spike pit.

Rick can only use weapons while he is standing or jumping; this means that he is free to crouch down and kick (or even slide-kick) the enemies, in order to save weapons for the tougher enemies in a particular section. Also, every time he picks up another weapon, Rick will drop the current weapon slightly ahead of him, allowing him to pick it up again - and this is particularly useful against Biggy Man on the third stage, as Rick will easily be able to blast him away with two Shotguns. However, if he had been grabbed on the bridge by a Monstrous Hand, he would have lost the first Shotgun if he was holding it.

Finally, if Rick remains in one place for too long, a purple cloud will slowly make its way towards him from the left side of the screen; it will injure Rick if it touches him, and the only way to lose it is to scroll that screen forward. You will also notice that if you take too long over defeating a boss, a blue orb will slowly make its way towards Rick from the right side of the screen - and it will also injure Rick if it touches him, meaning that the only way to avoid it is to crouch down and finish the boss off by kicking it. However, once his foot connects with the boss for that final required time, it will immediately disappear.