The creature stage is the next major stage of your Spore journey and involves you evolving your creature and surviving. It is similar to the cell stage but completely in 3D and lets you interact with other creatures beyond attacking. 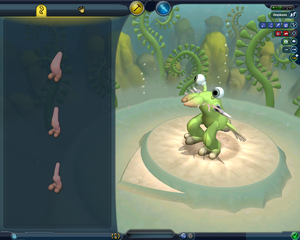 Before you start controlling your creature. You'll encounter the initial creature editor. It contains parts from the cell editor as well as three legs so that your creature can walk. The main purpose is to allow you to design your creature to adapt to life on land.

On your journey you'll encounter other creatures. The options of what to do with them are simple. Eat them to get food and socialize to form alliances. A normal creature will either be friendly or aggressive. If an aggressive creature approaches the nest, be carful as you might have to prepare for a fight. There are also two special types of creatures.

Rogue creatures are powerful versions of creatures found later on in the creature stage. These creatures typically have about 250 health and may have slightly boosted statistics as well as being slightly larger. They are also, by virtue of their large amount of health, quite difficult to kill and are usually far easier to ally with, not to mention giving you a super strong pack. If you manage to fill your pack with rogue creatures it will make killing an epic, if you wish to do it, so much easier

Epic creatures are massive reincarnations of other creatures. Like rogue creatures they have boosted health and statistics, but this time it's to a far greater degree. They'll often be guarding some bone piles with valuable body parts. If you want the body parts, you can do two things.

You can create a pack depending on your creature’s brain size. Packs consist of:

Packs can come in handy, especially if you want to battle an epic creature.

There are two main ways to deal with other creatures; socialize with them or fight with them.

Creatures can now socialize with other creatures to reap a variety of rewards such as forming packs. There are four social abilities in the game.

Each ability has a five-score rating. You'll know what rating your creature has simply by checking the bars at the top-right corner of the creature creator screen. While you can use whatever interactions you want to try and impress the creature. There are ways to make it go quicker. When approaching, try to sing first and then watch the creature and it will attempt one of the four interactions. Match the plan and raise your social meter. Repeat this way until both meters meet in the middle. The skills you'll need depend on the creature. When meeting a creature, check it out in the Sporepedia first. The skills it has are the skills you'll most likely need. If you have a high rating for the skill being used, you'll fill your social meter quicker. Failing socializing, if you're not a herbivore, you can always resort to combat.

Carnivores and herbivores need food. While herbivores can rely on fruit to satisfy their need, carnivores must eat other creatures. The only problem is they're usually alive and so they need to be beaten in order to be eaten. Combat, like socialization relies on four abilities.

Combat is simple, really. Attack the creature until they run out of health points. Find more body parts and upgrade your abilities and then attack more powerful creatures. In fact, you could even defeat an epic creature if you made the right decision.

Jumping lifts you high into the air. Upgrade your jump ability to reach further heights.

Fly high above the ground and possible enemies for an amount of time. Upgrading this ability lets you fly further distances without touching the ground.

Take a speed boost for a short amount of time. As always, getting a higher rating lets you sprint a faster distance but also reduces the recharge time.

Turn half-transparent and maneuver through enemy territory without being spotted. Higher ratings for this ability amount to higher sneaking distances.

Your creatures need food to survive. If a thought bubble pops up about eating, find food immediately. Keep track of your hunger bar as well as a low hunger bar decreases your health bar until you go down to 0. You'll respawn at the nest but you'll still need to eat. Finding food is easy but the type you need depends on what your creature is. Also note that if you eat the wrong type of food, your creature won’t like you for it.

If you're a carnivore, you're going to have to eat meat at some point. This doesn't necessarily mean you have to do the dirty work yourself though, as your creature could be as much a charming scavenger as it could be a vicious herbivore. Evolving hands means your creature can rip chunks of meat out of corpses and carry it until it either finishes the meat or needs its hands for another task.

Very simply, herbivores eat fruit and only fruit. Actually, if they eat meat, they'll be very sick. Fruit can be found on the ground, in bushes and on trees.

Omnivores can eat any food from any of the places detailed above. 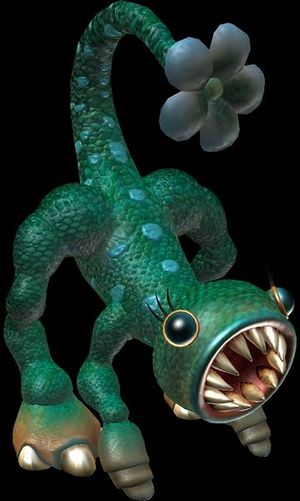 There are two things to note about your creature as you're unlocking it.

One last thing, you'll need DNA points if you want to advance your creature. There are plenty of ways to earn them.

You can have one of three abilities in this stage depending on how you played the cell stage.