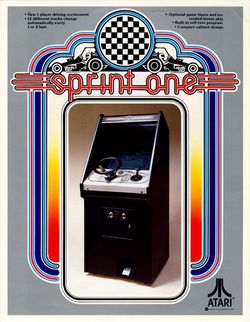 Sprint 1 is a racing arcade game, that had been developed by Kee Games for Atari in 1978; it utilizes a Motorola M6502 (running at 756 KHz), and, as the name suggests, it is the fourth title in their Sprint series. The gameplay is identical to that of the first title in the series, Sprint 2, which was released two years earlier, only with the removal of the second-player capability - and the tracks shall also advance automatically once the player has completed a full lap of the current one. Everything else is the same.