This is the first game in the Sprint series. For other games in the series see the Sprint category. 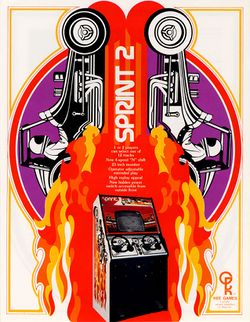 Sprint 2 is a racing arcade game, that was developed by Kee Games for Atari, Inc., in 1976; it utilizes a Motorola M6502 (running at 756 KHz), and the players must use a steering wheel, a 4-position gear shifter, and a single pedal to take control of a small car, white for 1P and black for 2P. Two gray CPU-controlled cars will also be present - and, if there is only one player, 2P's car will also be controlled by the CPU. Both players must drive around their mutually-chosen track (there is twelve to choose from) as many times as they can; they shall receive 2 points for every metre travelled, and their time will be extended if they reach a certain amount of points. If the arcade operators have set the "Oil Slicks" dip switch setting to "On", the tracks shall also have oil slicks (which have the word "OIL" written in them) which may make your cars slip, if they drive through them - and, once the timer runs out, both players will be rated "GRANNY", "ROOKIE" or "PRO" depending on their performance. This was also the first game to ever feature the classical "arcade font" (nicknamed "Joystix") and is the first title in the Sprint series (it was followed by five sequels); Sprint 4 (1977), Sprint 8 (1977), Sprint 1 (1978), Super Sprint (1986) and Championship Sprint (1986). Bad Lands (1989) also has a similar gameplay to the series.