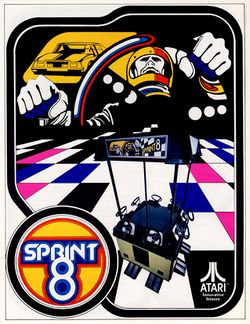 Sprint 8 is a racing arcade game which was released by Atari (in 1977); it utilizes a Motorola M6800 (running at 1.005 MHz), and as the name suggests, it is the sequel to Sprint 4 which was released in the same year. The players must use a steering wheel and a four-position gear shifter to take control for a car (red for 1P, blue for 2P, yellow for 3P, green for 4P, magenta for 5P, beige for 6P, turquoise for 7P and peach for 8P), with two pedals to make them accelerate and decelerate - and, if there are less than eight players, the remaining cars will be controlled by the CPU and their score displays will again say "TRAFFIC", instead of a number. As with the first two games, the object is to drive around your chosen track as many times as possible; you shall receive 1 point for every metre travelled, but as in that previous game, the game timer is not displayed upon the screen (so you again can not tell whether you have earned enough points to extend it), and the required value to do that is again 250. Once the game's time (which, on this occasion, can either be 60, 69, 77, 86, 95, 103, 112, 120, 129, 138, 146, 155, 163, 172, 181 or 189 seconds, again determined by how the arcade operator has set the cabinet's "Play Time" dipswitch) has run out, all the players will once again be rated "GRANNY", "ROOKIE", or "PRO" - and there are only four tracks to choose from this time, which is eight and six less than the amounts of tracks that had been available for the first and second games respectively.