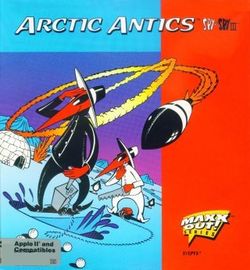 Spy vs. Spy III: Arctic Antics is a computer game first published by First Star Software in 1986 for the Atari 8-bit family, Commodore 64 and Apple II computers. It is the sequel to the second Category:Spy vs. Spy game, Spy vs. Spy II: The Island Caper. Like the original games, it is a two-player, split-screen game, based on MAD Magazine's long running cartoon strip, Spy vs. Spy, about the slapstick antics of two spies trying to kill each other with improbably complex and elaborate traps and weapons.

It was also ported to a much wider range of platforms. It was released on several popular European computer formats, such as the Sinclair ZX Spectrum, and Amstrad CPC. It received 16-bit conversions on the Atari ST, and Commodore Amiga. It is the only version of the game which was not converted for play on any home console, but it is the first title to receive a port for the burgeoning MS-DOS platform on PCs.