Immediately group your starting units and lead them along the path. After about 10 seconds you should run into two Zerglings. Send your Zealots to take care of these. A little bit further down the road, right after you see a choke point, there will be 3 Zerglings and 2 Hydralisks; send your Zealots first and task your Dragoons to attack the Hydras. Continue on towards the base, encountering 2 more Hydras and about 4-5 groups of 2 Zerglings each. 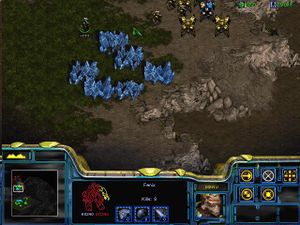 Send Fenix out to kill the Sunken.

Upon reaching the base, enter and watch the cutscene. Afterward, queue up 3 Probes. Use the first one to build a pylon and keep making Probes until you have about 5. Immediately build a Cybernetics Core, followed by a Dragoon (the Core is necessary to build Dragoons) and 6 Zealots. When you have a group of 12 Zealots and 6 Dragoons (assuming you didn't lose any) send them out of your base. Before you send them into the upper left corner of the map, where the Zerg base lies, have Fenix go first. He'll run into two Zerglings before getting to a ramp. Send him up the ramp and northwest from there, where you'll find a Sunken Colony. Send Fenix at it (don't worry, he'll win). Then, send him south and take out the remaining 5 Zerglings. The path should be clear now, so send your ragtag force up past him and attack the main base. Order your Dragoons to engage the Mutalisks and the Sunkens while having the Zealots handle the units. After you take out all the buildings and Drones, GG!