StarCraft/Protoss mission 4: The Hunt for Tassadar

This is similar to an installation mission, in that you are given a fixed number of units which you must manage frugally as you go through a path to your destination. Specifically, you have four Zealots, four Dragoons, and a High Templar; this last unit will be the most useful in the first part of this mission.

Go up the ramp and head northwest. Almost immediately Zerglings will spring up to fight you; dispatch them and continue. Your next obstacle is a Sunken Colony, protected by six or so Burrowed Zerglings. You should lure them out and kill them first to make this easy, so cautiously send a Zealot forward until the Zerglings spring up. Then use the Templar's Psionic Storm ability (remember how much grief this caused you near the end of the last campaign?) to fry them in about 2 seconds. Then just rush the Sunken with your combat units, and it should go down quickly.

Psionic Storm
This powerful spell does 112 damage to all targets caught under it, and therefore comes in very handy against masses of weak units like Marines and Hydralisks. You can also use this to soften up tougher units like Zealots and Mutalisks, but don't waste them on buildings—it won't do anything, and you just lost 75 points of valuable Templar energy!

Now head northeast, and you'll come across the same stuff you just fought through: Sunken Colony and Burrowed Zerglings. Repeat the previous strategy, then follow the path into a large clearing. To get into the lowered area (which is your path to Tassadar), you have to circle around right and fight some Hydralisks and Zerglings. Once you're in the lowered path, keep following it (the Hydralisks that bother you from above can be dispatched with Psionic Storm, even if you can't see them) until you get to a Protoss base. You've found Tassadar!

A fairly lengthy dialogue takes place, and Tassadar will ask you to defy the Conclave's command, instead taking him and his new ally, Jim Raynor (yes), to safety. As always, you don't get a choice.

Going back to the Beacon[edit]

There are two things you can now do; turn right around and go back to the Beacon, or use the substantial resources of your base to build a larger force. You shouldn't really have too much problems if you just went back, because there isn't that much resistance on the way (not to mention that you get Raynor and Tassadar, two very powerful units), but taking the latter approach is recommended because you get to experiment with Archons, which are created by fusing two High Templar together.

Build your base as usual, bringing in two Gateways and teching up to the Templar Archives as quickly as possible (the prerequisites for that structure are Gateway, Cybernetics Core, and Citadel of Adun, in that order). Your finishing force should have about six Zealots, four Dragoons, the two Templar that you're given (you get one at Tassadar's base), two Archons (this requires four Templar, which is quite an investment in Vespene gas), and the two hero units. Try to also give the Zealots their leg enhancement upgrade at the Citadel. 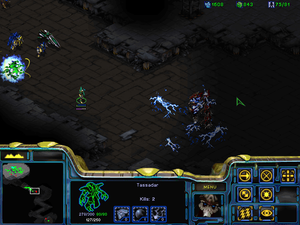 Nothing like a good Storm to dispose of those pesky Zerg.

When you're ready to take the path back to the Beacon, lead with the Archons, since their 360 HP can eat up damage, then with the Zealots and Templar, then the heroes, and finally Dragoons bringing up the rear. Lots of Zerg units will have spawned, and remember not to hold back with those Psionic Storms when many units are clumped together. Also, Tassadar is a High Templar, so you can cast Storms with him as well (he also has an attack ability). The most difficult fight is at the ramp in front of the Beacon; the Zerg employ many Mutalisks and Hydralisks here, so forget about formation and just rush them after a good Storm or two. Afterwards, have the heroes step onto the Beacon to win the mission.