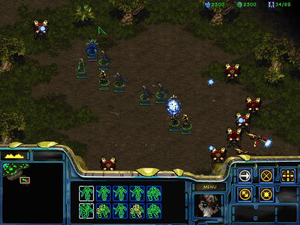 You do not want to stay here and fight.

Immediately after hitting "start", you find yourself under attack in the middle of the map. Zeratul and the Dark Templar have permanent cloaking and are temporarily safe, but the other units are not. Select all the non-cloaked guys and have them make a run towards your base (top left corner) while the Dark Templar rip up the enemy Dragoons to buy time. Do this only long enough to let the others escape though; the enemy Protoss have Observers, and will bring them out shortly to reveal the Templar. The enemy units will chase you to your base, but the Photon Cannons at the entrance will hold them off easily.

Now you can start taking stock of the situation. Notice that you actually have a very large base and are a good way up the tech tree; you start with a Stargate! Also, 2500 minerals and 2500 gas, as well as Pylons worth almost 90 supply, are all given. You'll need all of this to survive the early parts of this scenario. 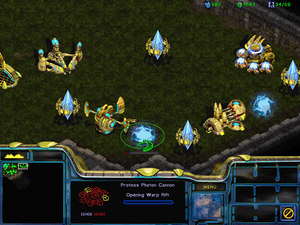 Don't skimp on static defense in vulnerable parts of your base.

Use the starting resources to build a large fleet of Probes; don't stop at 1.5 Probes per mineral patch, keep making more. This is because you will be expanding shortly, and you want to be able to just transfer all your excess Probes there instead of having to wait for the new Nexus to make them. Also, build a second Gateway and pump Zealots and Dragoons from both. Build a Robotics Facility plus both supporting buildings as well. The Templar tech tree (Citadel of Adun, then Templar Archives, then upgrades) is not strictly necessary in this mission, but it never hurts to have Psionic Storm and Archons so try to build them later when you have the extra resources. Finally, as you're doing all this place a few more Pylons along the ridge that your base is on and build Photon Cannons galore. They'll save you a lot of trouble later. 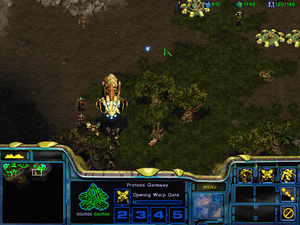 The enemy loves to hit this spot. Be ready with a large network of defenses (the one shown is inadequate).

When you have your first Observer (build one before you start going for Reavers), have it travel a bit east of your base. You'll find a resource deposit not too far away. Then, build a group of six Zealots, four Dragoons, and four Scouts, and have them accompany a band of Probes to the location. Consider taking Zeratul and the Dark Templar as well—this spot falls under attack often, and their powerful attacks (40 for the Templar and a ludicrous 100 for Zeratul) will greatly help. Fenix and Tassadar, while still very tough, can die pretty easily without the benefit of cloaking, so leave these guys in the main. 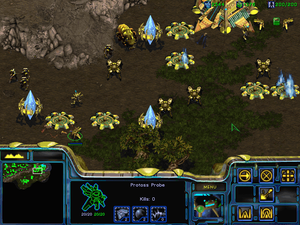 Now you can stop building.

Do the standard drill at the expansion—Probes running around placing Photon Cannons and Assimilator while the Nexus morphs in. Also, since ground-based reinforcements take a while to arrive here from the main base, build a third Gateway slightly above the ramp from the plateau down to the expansion. Eventually, you should have a grid of about a dozen Cannons defending this expansion. You can't rely too much on units here, because the enemy Protoss have Arbiters that will Stasis entire groups of defensive units at once. Keep around a bunch of Scouts to counter Reaver pushes (don't have them chase Arbiters and get Stasised for it), and Dragoons for beating back Carriers. 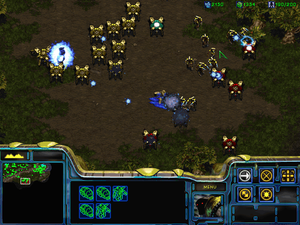 Push out to this area and exact revenge onto the enemy that harassed you earlier.

Remember that area where the Dark Templar first started in? If you haven't explored the spot with Observers yet, do so now. You'll most likely find a lot of Dragoons and Scouts defending it. To make the eventual push on the southern enemy base, you have to go through here (unless you're attacking from the northeast, which is asking for unnecessary trouble). You may either prepare a very large finishing force and sweep this area on your way down to the enemy base, or take a smaller force and "secure" the forest to use as a staging ground. Either way is viable; securing the area can be difficult due to frequent enemy attacks (counter this by quickly building a defense network of Photon Cannons and a Shield Battery or two), but building and maintaining a large force without a forward staging ground can also be problematic.

To finish this, you'll need a full group of Zealots, a full group of Dragoons, eight Scouts, two or three Reavers (preferably in Shuttles), and an Observer. If you teched to High Templar, include three or four Archons as well; if not, throw in an additional six Dragoons instead. A High Templar or two are also welcome if you did go that route. This force shouldn't need reinforcements, but just to be safe keep making units and staging them if applicable. Finally, it's almost never a bad idea to max out your supply limit, so go all-out and double the above numbers if you want to play it really safe. Upgrade everything to level three, because the enemy Protoss are at that level and you want to fight them effectively. Remember to grab unit-specific upgrades like Scarab damage and Singularity Charge.

The victory trigger for this mission is destroying the Nexus in the very southeast corner of the map. To get there, you'll have to fight through either at least one enemy base; attacking from the northeast (where your expansion is) means you're going through almost three, while attacking through the center of the map means fighting through two. If you wish to take either of these approaches, you'll have to quickly cross the bridges and use Reavers to neutralize the numerous Cannons and ground units before moving in. However, there's an easier, sneaky path to the Nexus. 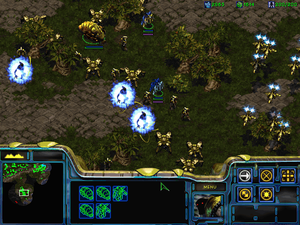 Try and avoid the Red base as you approach the objective.

Have the force clear the center of the map if you haven't already, and go south from there (lead with the Observer at all times). Avoid the Red Ara Tribe base unless you like unnecessary fights, and continue onto the bridge (refer to screenshots for help in determining locations). You'll come to a base fortified with stone walls, Dragoons patrolling the top. This is not the one you want, so stay out of enemy range while the entire attack force follows the river southwest. Continue all the way to the bottom of the map, where the river and edge of the map prevent you from going further. 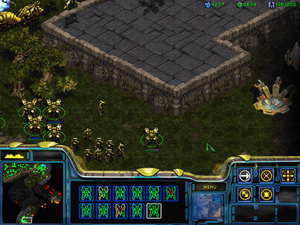 Here is the insertion point.

From here, getting to that Nexus is just a matter of pushing straight east. Squeeze your units through the bottleneck at the bottom, and immediately enemy welcoming parties will pounce on you. Again, Arbiters are very dangerous, so try to focus fire on them if any are nearby. As you push, lead with Zealots, Archons, and Scouts, with Reavers close behind. Heavy enemy units like Archons and structures (especially Photon Cannons) should be taken out with the upgraded Scarabs while other units take fire for the Reavers. As is almost always the case, Dragoons should be bringing up the rear. This ensures that your attack force can handle enemy Carriers and Scouts attacking from any direction. 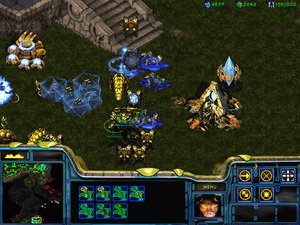 Resistance will be stiff, but your balanced force can break it.

If large numbers of enemy units are giving you trouble, consider hitting them with a couple Psionic Storms (if you have it) to get rid of them quicker; otherwise you'll have to keep busy building Scarabs. Try not to get bogged down destroying all the buildings in your way, because the enemy can produce reinforcements very quickly. Just kill all the units and Cannons in an area, then move on before you have to fight at that spot again. When you reach the Nexus, pound it with everything you've got and it will be down before you know it. You can't skip the lengthy cutscene that follows, so might as well pay attention to it! 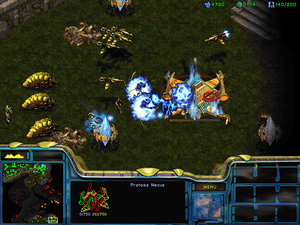 It really doesn't take much to bring the Nexus down. Just protect your important units.

New players often don't expand in time, or squander resources trying to secure that center area. Starting over is always the easiest choice when you're running too short on money to mount a final offensive, but here's a thing you can try before doing that.

Build two Shuttles. Then, load Fenix, Tassadar, Zeratul, and four Dark Templar into them. Have the Shuttles fly to the river that runs diagonally across the map, trying to not attract enemy attention. Take along any Scouts that you have, as well. Follow the river all the way down, and you'll be at the bottleneck that the ground forces took in the above walkthrough. Now unload everyone, and start the push. Shuttles and Scouts are expendable, so have them go first and take hits while the hero units rip apart enemy units. The Dark Templar are also expendable, but the enemy usually can't see them, so once the air units are down Tassadar and Fenix will be in trouble. Try to ignore most enemies (unless they're Reavers or other splash damage units), and don't even try to fight air units. When you're at the Nexus, the heroes should be able to bring it down very quickly provided there's still something taking fire for them (if you have any Scouts, have those distract enemies rather than shoot the Nexus). Tassadar is the most vulnerable one, so keep an eye on his health bar.

Similar to the Hero Rush option, it's possible, and somewhat perhaps safer to construct 20-25 Scouts and have them fly downstream on the river and then directly order them to attack the Nexus. While they will suffer losses, overall they should be able to destroy the building before being destroyed themselves.

Immediately after you start send Tassadar to your main base and take Zeratul and The Dark Templar (you'd better take the Zealots that are fighting as well, because you will probably need them to take fire for The Dark Templar). Send them south to the entrance of the Orange base and arrange them in the following order: first the Zealots, then two Dark Templar, then Zeratul and finally the other two Dark Templar. Move them to the very rear of the base, where the Nexus is and start attacking it, without paying any attention to enemy units or attacks. When it is left with about 200 HP the enemy usually sends Observers to detect The Dark Templar and Zeratul, but don't worry about the threat of losing your Dark Templar - you should be able to finish off the Nexus before your units die.

You don't actually have to fight the Shrine Protoss to the southeast, although you will find it a lot easier to do than to strike both of the Red bases in the northeast and southwest. You can call the same victory trigger by destroying both Nexuses belonging to Red. This does mean you will have to fight harder- through more Arbiters, Dragoons, etc. But if this is what you wish to try, then go ahead.