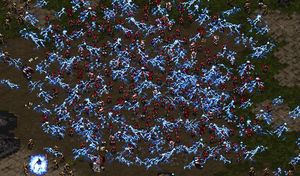 All units under a Psionic Storm take the same damage regardless of how many units are affected, making Psionic Storm a good spell to use on clusters of troops. The attack affects a chosen area and does 112 damage over the course of four seconds. Once Psionic Storm begins, low-life units such as gatherers, infantry, and Zerglings have a minimal chance of escape. Psionic Storm affects cloaked, burrowed, hallucinated, Dark Swarm, and Disruption Web affected units. Psionic Storm is effective against particularly slow units.

One strategy, leading the enemy, involves predicting where enemy forces will be when the Psionic Storm's damage begins and not when it is cast, since the spell involves a delay. Psionic Storm can also be used on melee enemies, but will possibly damage any of your own units in the area. Psionic Storm is also effective against enemy mining operations, facilitated by a shuttle drop. Additional casts of Psionic Storm at the same location do not stack. Units that move out of the storm before it is finished (or move into it as it is in effect) take only some of the damage.

Stasis Field and Recall can get affected units out of trouble. Later in the game, players must beware of using their Psionic Storm too early on enemy forces that appear too small, as the enemy may have reserve troops for when the High Templar run out of energy. Psionic Storm does not work against enemy structures.

Creates two duplicates of the target unit which do no damage and have no special abilities.

Hallucination works on both allied and enemy units; in either case, the hallucinations are marked as the caster's allies. Hallucinated Arbiters are particularly cost-effective if grouped with a real one, although they can be defeated with a well-placed Stasis Field. Enemies may waste costly spells on Hallucinations, and they're instantly destroyed by any spell except Hallucination. Hallucinations lose HP/Shields twice as fast as normal units and have neither weaponry nor armor. Hallucinations appear to attack and attract enemy units.

Hallucination forces an enemy to divert focused fire either upon fake units or spreading out the firepower. (NOTE: Against computers, if your High Templar(s) needs to escape and is being chased, hallucinate a couple of times and the hallucinations will divert all the computer's units to attacking the hallucinations (which may take a while for higher HP units) which gives the High Templar(s) an oppurtunity to escape.) Fresh duplicates can be created from other hallucinations. They also serve as decoys, drawing the enemy's attention either to a distant place on the map or forcing the enemy to make poor decisions. The superior numbers that this skill may grant can intimidate an opponent. Hallucinations also serve well as scouts and cannon fodder, in which case their effects may be doubled by separating the two dittos.

Hallucinations do not produce anything and do not cast spells, which make hallucinated Reavers, Carriers, and spellcasters very poor and easily identifiable imitations. Beware of accidentally using this spell on an Interceptor instead of the Carrier. New ones appear out of nowhere, and players may be able to keep track of them. Some enemy spells, such as Ensnare, can vaporize multiple hallucinations in one cast.

Gets two dark templar to merge into a dark archon. A dark archon is capable of using three spells: Feedback, Mind Control, and Maelstrom.

Feedback is the Dark Archon's only way of doing damage, or possibly killing, any unit. Feedback takes the Target's energy and uses it against them and inflicts damage to the target. The amount of damage dealt depends on the target's current amount of energy. For example, if Feedback is used against a Terran Ghost (45HP) with 100 energy, then Feedback will deal 100 damage to the Ghost, regardless of the armor level. Since the damage level exceeds the amount of HP the Ghost has, the Ghost ultimately dies.

In contrast, if Feedback is used against a Battlecruiser (500HP) with 250 energy, then Feedback will only do 250 damage. The Battlecruiser loses 250 HP as well as all energy, so it disables its ability to Yamato for a long time. Note, using the Feedback again in this situation is useless because the Battlecruiser already lost all energy and thus can only be dealt 2 or 3 damage at a time, which is a complete waste of energy.

Maelstrom is the Protoss equivelant for Lockdown - except only Organic units can be targeted and the spell lasts for a shorter period of time. Maelstrom stuns all organic units, including allied units, and they can not Attack, use spells or move. This makes them completely useless and vulnerable to any attack. This is definitely a spell one should consider researching against a Zerg opponent (all of their units can be maelstromed). A notable combination is getting a dark archon to maelstrom several units and getting a high templar to Psi Storm them. The Maelstrom will last long enough for the High Templar to cast two Psi Storms, which will decimate a bunch of Zerglings, Hydralisks, and Mutalisks.

Mind control allows a player to gain access of the target unit. The unit then becomes completely yours, but however, the dark archon loses all shield points, and thus becomes a vulnerable target for enemy units.

An interesting thing to note is that if a player mind controls a builder/gatherer unit of a separate race, then the current player is able to build up Zerg and Terran tech trees and armies in addition to the starting Protoss base. The best thing is that the Zerg and Terran supply counts are kept separate from the starting Protoss supply. In other words, a player could potentially have 600 supply altogether (200 from Terran, 200 from Zerg, 200 from Protoss), thus giving the player a far greater advantage. Of course this will require lots of resources, so use if you have a considerable amount of resources for burning off. Additionally, mind controlled units will add to the existing supply, but if the supply limit has been reached, mind control will still allow the player to capture additional units and is thus the only true way to exceed the supply limit.

Disruption Web, cast from a Protoss Corsair, targets an area for a short period of time. (Initially this spell lasted for a really long time, and it was so unbalanced that Blizzard made a patch in which they corrected the duration of this spell.) Disruption Web can disable any unit or building under it from attacking (but they are still capable of using special abilites such as Lockdown or Psi Storm. It also does not affect a building's ability to detect.

Using Disruption Web against enemy towers can be useful for getting past enemy defenses as they are unable to attack. Terran Bunkers are also affected - the units inside cannot attack. Disruption Web is also great if your enemy units are attacking from one large clump, as one disruption web will make them useless unless they walk out of it.

Builds a Scarab for use by a Reaver. (See Reaver)

Builds interceptors so that the carrier can attack.

Statis field can be cast from an Arbiter and completely freezes all units for a period of time. Allied and enemy units are affected, so use with caution.

When a unit is stasised, the unit becomes invincible - no attack or special ability can affect it. While in statis, a Protoss Unit is still able to regenerate shield, so an interesting strategy would be to statis injured units for a while if a shield battery is not available.

An effective way of using the Stasis Field effectively is to buy oneself time. For example, if your base is being attacked from multiple sides, usually the player would divide up the forces and potentially lose a lot of units or be completely overrun. An alternative would be to Stasis Field on all but one of the attack forces and concentrate all units on that force. The Statis spell lasts a some time to wear off (40 game seconds), and since arbiters can stasis twice even without energy upgrade, you can take your time and only worry about keeping your units alive instead of evacuating any remaining survivors.

Places a wormhole which units enter, and teleports them to the location of the arbiter. This is the Protoss method of "teleportation" and can be really effective when scouting before attacking. Send several arbiters ahead of the rest of the strike force and stop outside of the enemy expansion. During this time, if you happened to plan an attack at the same time your enemies did, then the strike force at the main base can help defend while the arbiters get into position. Cast a well placed Recall (takes 150 energy - same as a Terran Yamato or a Zerg Spawn Broodling - so use with care) and warp all your units you want to use for attack, and let the fun begin. The arbiters can either stay with the army to cloak, or you can send them back to recall them back if a hasty retreat is necessary.