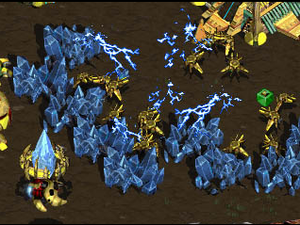 Two Protoss factions are at war. One side's Shuttle (bottom left) has dropped a Templar into the other's mineral line, and the Templar's Psionic Storms (the "lightning") will quickly wipe out the Probes that are gathering minerals.

Long ago a Starcraft expert who played under the name "Zileas" wrote a famous article "The true cost of peons" - "peons" because that's what workers were called in Warcraft II. Then he updated it for Starcraft and later for Warcraft III, but unfortunately the Starcraft version no longer seems to be available. So this page attempts to summarize the basic idea.

The purpose of the tactic is blow a huge hole in the enemy's mineral gathering operation. It's effective if:

The really nasty part of this formula is 0.5gN2, which means the loss increases in proportion to the square of the number of workers killed.

According to Zileas' calculations, if you can kill 5 or 6 mineral miners it's worth sacrificing all the troops and the air transport that drops them, because the minerals the enemy doesn't get while replacing the losses exceed the mineral cost of the units you sacrificed. This kind of drop is particularly effective for Protoss players who have a fully charged Templar - 2 or 3 Psionic Storms will almost certainly wipe out all of the mineral miners, and at a relatively low maximum cost (Shuttle + 1 Templar).

It's important to kill the workers as fast as possible, to maximize the damage to your opponent's economy before your troops are killed:

Of course the loss you inflict is temporary, as your opponent will eventually mine all the minerals if given the time. What you really gain by this tactic is time, and you must use it to expand or to follow up with a larger attack.