You start with a base! Put your two SCVs on minerals, and hotkey the Marines to 1 and Raynor to 3. Now, as the minerals come in, build SCVs until you have six or seven. After that, have an SCV build a Refinery. Once this building is finished, the SCV that built it will automatically start gathering. There's no need to place more than one on gas. Train two more Marines (add them to your group) and head up the ramp with them and Raynor. You'll come across some Zerglings and a Creep Colony, which is what the Zerg rely on to build their base. Destroy it. If you do this right, you should have four Marines remaining after this attack. 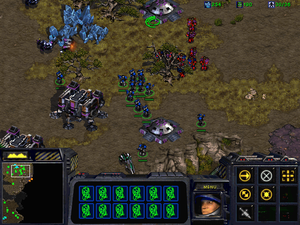 This is what you should have before you attempt an attack.

Now continue north. You'll come to Backwater Station, local SCVs will thank you for the rescue, and once one of your units reach the Command Center of this station this entire base falls under your control. Put the SCVs here on minerals, as well. You'll notice you have some Firebats under your control. Group them to 2. You should have lots of money coming in now; use it and the two Barracks at Backwater Station to build 12 Marines and 8 Firebats, all hotkeyed to their respective groups. Also, if you can research U-238 shells at the Academy. 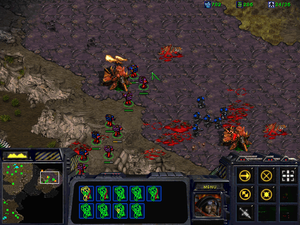 Fight through the Zerg territory...

When the attack force is ready, send it east of the bunkers then south, down the ramp, and into a pack of Zerglings and Hydralisks (make sure to lead with Marines). Once you've beat them, lead your forces up the ramp... to yet another pack of enemies to mow down. You should still have half your Marines and most of your Firebats when the smoke clears. Go north, and you'll run into an Infested Command Center. Destroy it to finish the mission! 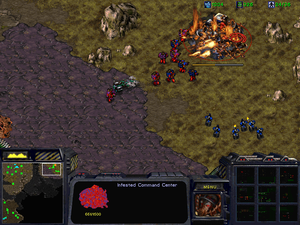 ...and destroy this Command Center.

Two patrols, well, patrol the wastelands, and accidentally hits a Zergling with their truck. They subsequently are staring up at the face of a Hydralisk, and say their goodbyes.