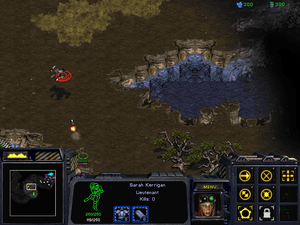 Your small force starts out in the upper left corner of the map. Just move them south until you meet Kerrigan. After the short dialogue, have your forces take out the Missile Turrets and the Marine after crossing the bridge. Continue until you can see a Wraith to your north. Have Kerrigan Lockdown this thing, just to see how it works. A Lockdowned unit cannot attack or move for a while, so this is the perfect ability to use against heavy, well-armored units. Anyway, leave Kerrigan here and proceed with the other units eastward. 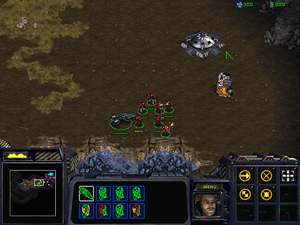 Destroy this Turret only and have everyone pull back.

When you first met Kerrigan, she revealed to you the entire path toward the Antigan base. Take the Marines and Raynor and destroy the lone Missile Turret next to the first bunker, ignoring any attacks. As soon as the Turret's rubble, pull your forces out of the bunker's range. 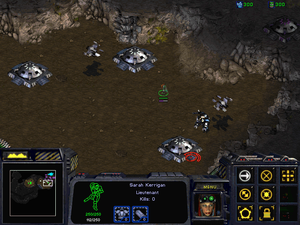 Watch Kerrigan walk into the base undetected.

Now it's real easy—simply Cloak Kerrigan and send her to the Antigan Command Center beacon. Without their Turret detecting for them, the enemy won't be able to see Kerrigan, and therefore will ignore her as she kills their commanding officer (by the way, you don't actually get to see her do this).

Now the entire base falls under your control. However, some bunkers are still occupied by the enemy, so help your own bunkers' troops take these out. Now focus on gathering resources. Build about 10 SCVs and put 7 on minerals and 2 to 3 on gas. Also as this is going on, lift off your Starport (it's the northernmost building) and move it down to near your Barracks. The Confederate base lies in the entire southern side of the map, and is therefore a bit larger than your own. There won't be very many attacks, so a full bunker or two can hold them off. Also, if your bunkers are under attack, remember to have an SCV repair it as it takes hits. Be careful, though, because if you wait too long building forces and staying within your base, the enemy will drop siege tanks complete with siege mode in front of your base.

Build up a force of: 2 groups of 12 Marines each, 1 group consisting of 2 Marines and 10 Firebats, 1 group of 12 Wraiths, at least 4 Vultures, and 6 Dropships (you'll need two or more Starports to do this quickly enough). Also, research U-238 shells at the Academy, Cloaking Field and Apollo Reactor at the Control Tower, and as many upgrades as possible at the Engineering Bay. You have more minerals than you could possibly want at your main base, but if you happen to squander them, grab the ones at the southern part of your base. When you're ready, load everyone into Dropships. Now this is important—when loading units, never shift back and forth between hotkeyed groups. Instead do this: say you're loading a 12-Marine group. A Dropship holds 8 Marines, and therefore four will be left over. With the four Marines still selected, right-click on another Dropship. This way you avoid having all your hotkeys messed up when the group lands. 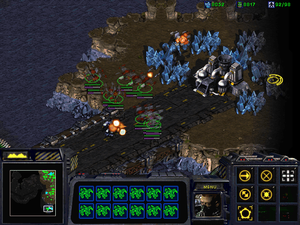 First have the Wraiths Cloak and wreak havoc. 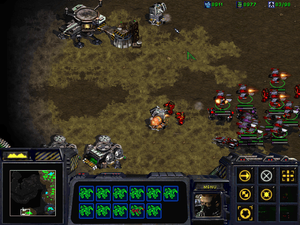 Then throw everyone into this base. 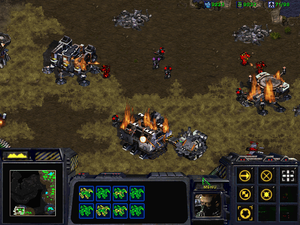 It might get ugly, but you should be able to beat this with your initial force.

First have the Wraiths go straight south from your base and Cloak. Have them take out any enemy units plus the Refinery there. Then move in all the Dropships and unload on the island. Slowly move your forces forward, annihilating Missile Turrets first so the Wraiths can do their work without being detected. This group should be sufficient to mop up the entire base; if not, quickly build an additional group or two of Marines and send them in (you might even want to do this during the first strike). Destroy every building, and victory is yours!

Cinematic #2
The Downing of Norad II

General Duke of the Confederacy is going... well, somewhere aboard his flagship Norad II when he is attacked by a group of Zerg Scourge. The ship is forced to crash-land.