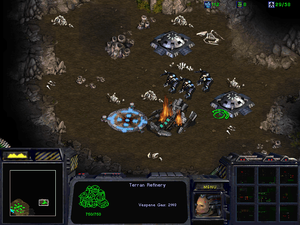 Your forces start in the southern part of the map. Notice the white Command Center shrouded in Fog of War at the left side of the minimap: that's your base. Go there, killing the few Zerg burrowed between you and the base. A few minutes after you gain the base (by approaching the Command Center, of course), Norad II's position will be revealed. There really aren't too much things to do with the units here: put the Marines in the bunkers, and when the position is not under attack, repair the bunkers, Norad II itself, or the Goliaths with the SCVs. Don't try to build anything or launch an attack from there, though, because this will trigger the Zerg to attack you viciously.

But anyway, for the base building: when you gain the base, the Engineering Bay is on fire. It's in a critical zone, so immediately have an SCV repair it while the other one gathers minerals. Put the lone Firebat in a bunker (doesn't matter which one) and hotkey all the Marines to 1. From here, just build SCVs until you have around 6 on minerals and 2 on gas (build a Refinery with your fifth or sixth SCV). Also, any new Marines you build during this time should be put into the bunkers, until each has at least three Marines in it. Then it's time for some construction. Have an SCV build a bunker a bit north from your Refinery, and later fill this one up too. Then, build a Factory, a Starport, an Armory, an Academy, a Comsat Station, and a Control Tower (preferably in that order). A Machine Shop is unnecessary, as all you can do with it in this mission is upgrade Vultures. 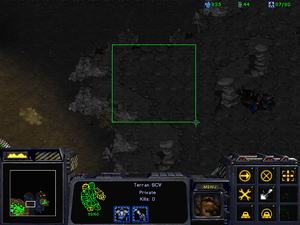 Land your troops in the selected area.

Sweep the entire area around the Norad II as many times as you can to get a feel for the terrain. Notice that Spore Colonies line the whole place, and part of your objectives is to bring two Dropships along with Raynor. You can try using Wraiths to kill these, but they have such a horrible ground attack that you'll need dozens and dozens to even make a dent in the thick defense. But there is one weak spot here. Scanner Sweep a bit left of the Norad II's position, then move your camera to where the bunker right next to the Engineering Bay is. From there go straight east until you come to the ridge surrounding the ship. See how there's a small piece of the ridge sticking out with no Spore Colony? This is the place where you'll have to airdrop ground forces. 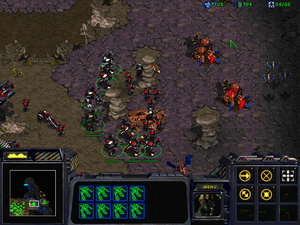 Build up a force of 8 Goliaths, 12 Marines, at least 2 Wraiths, and 4 Dropships. Also, upgrade everything at the Engineering Bay, U-238 shells at the Academy, and as much as you can in the Armory. Then build extra Marines and Vultures for backup. You have more than enough minerals to do this, but you'll be cutting it pretty close on gas—you might deplete the geyser early. Don't worry, as you'll still get a small stream, but you might want to put three SCVs on gas instead of two if this happens. When you're ready, load the attack force into Dropships and carefully send them to the airdrop point, leading with the Wraiths to take hits. With all the Dropships selected, use the Unload All command on a suitable spot; after they do, check to see if any Dropship still has units in it because they didn't have room to unload. Have the Marines take out five or six Spore Colonies while the Goliaths focus fire on the single Sunken Colony near you (don't bother with the other one farther away). Also, make sure to take out any Scourge you see. These little things look harmless, but their kamikaze attack deals enough damage to bring down a Dropship with just two of them. 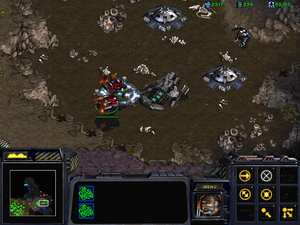 Simply bring two Dropships with Raynor in one to the beacon to finish the mission.

Don't let your forces wander away too far from the dropoff point; just kill enough Spore Colonies to clear a safe path where Dropships can fly over to the Norad II. Once you've done this, load Raynor onto a Dropship and send that with another Dropship to the ship's location. Then simply have Raynor step on the beacon to complete the mission and listen to a bit of story line dialogue.

When you feel it's time to rescue the downed Norad II, there is a quick and relatively easy way to get Jim onto the beacon: produce mass dropships.

If you're strapped for resources, you may want to consider this tactic. Hotkey the dropship containing Raynor, and rush the dropships over the spore colonies. Eight or so dummy dropships should distract the enemy Zerg from attacking. When positioning the dropships for rushing, it's suggested that Jim's dropship is in the middle - lagging dropships will be targeted, as are leading dropships.

With some micro, it's possible to clear a small area at the top of the Norad II ramp just large enough to fit a barracks. Once you build a barracks and start pumping out marines Duke can fight his way out by himself. Probably not the most effective option, but it can be fun to play from a different perspective.