You have to deliver the Psi Emitter to the beacon. You'll notice that the northern and southern outposts are under attack while Kerrigan talks; move all units back into main base, and liftoff the Science Facility and the Starport back. Now focus on gathering resources and building SCVs until you have seven on minerals and three on gas. Build a Machine Shop, an Armory, more Supply Depots, and later, an Academy and Comsat Station as money comes in. You get to use Siege Tanks in this mission, and the enemy does too; but the big difference is that your Tanks can go into Siege Mode once the relevant upgrade is researched at the Machine Shop, but the enemy's can't. Fend off periodic infantry/Wraith attacks with infantry of your own, using the Science Vessel you start with to detect cloaked Wraiths.

Build up a force of 1 Dropship, 10 Siege Tanks, 8 Wraiths, 8 Goliaths and 16 Marines. Also, research Siege Tech at the Machine Shop, U-238 shells at the Academy, and both infantry upgrades up to level 2. With the Armory, research nothing but Vehicle Weapons to further increase the power of your Tanks. All of this does take quite an amount of resources, so when you have about four Tanks and four Goliaths send them down to the spot where the Supply Depots used to be and set up a base there. Later, have these units join your strike force and instead have extra Marines stand guard.

When you're ready, load the Psi Emitter SCV (and another SCV if you wish to repair units as you go) onto the Dropship. The recommended route to take to get to the Beacon is the central path; if you take the upper one, you'll have to face a lot more enemy attacks. Follow the canyon at all times, meaning don't go up any ramps. Move your forces down in this order: Marines first, the Science Vessel above the Marines, Tanks second, Wraiths above the Tanks, and the Goliaths last. This ensures that your units can repel any attack. 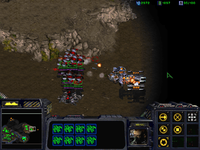 See? The Battlecruiser isn't so mighty after all. 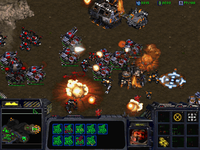 That's the way it's done.

You'll know you're near the objective when you come across a Missile Turret and a Battlecruiser comes to get you. The thing may look scary, but focused fire from the Wraiths will kill it very fast. At this point, use the attack-move command on every single unit on the area around the Beacon and cloak the Wraiths to help them survive a bit longer. When the Siege Tanks get close to the Beacon, have them all go into Siege mode and watch them reduce the base to rubble in about 15 seconds. Now move in the Dropship with the SCV at your leisure and have it step on the Beacon!

Simply order the nearby Science Vessel to use the Defensive Matrix ability on the SCV carrying the Psi Emitter and send the SCV to the beacon, ignoring all enemies. Don't give the move order multiple times even if enemy units are blocking your path - this will only confuse the SCV.

And that's it. Thirty seconds, and you're done. Congratulations on the shortest victory ever! 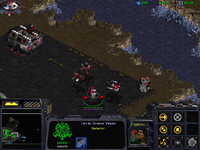 This is kind of like the above strategy. Move the Starport back to main base in the beginning and produce SCVs as you normally would. As soon as you can, add on the Control Tower and build a Dropship. Load the Emitter SCV into the Dropship, and send the Dropship and your Science Vessel to the area in the screenshot. Cross the river, ignoring the Marines. Cast Defensive Matrix on the Dropship, and send both vessels straight to the Beacon. Use the Science Vessel, or a few Wraiths if you have them, to divert enemy fire away from the Dropship. When you're near, with the Dropship selected right-click on the Beacon, and once the ship is above the Beacon click on the SCV's wireframe to finish the mission. 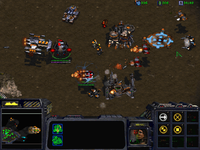