This will be a very long but fun kill-everything-on-the-map scenario. When you start, all buildings are floating and all units are on a small platform. Before you start wondering how to make any progress, notice that you have two Dropships. Load your units into them, and fly the entire fleet and your buildings northwest until you come to land. Set down all buildings next to their respective add-ons (you have two Command Centers and two Nuclear Silos) and start gathering minerals and gas with your SCVs. You have lots of minerals but only one Geyser, and it's inconveniently located far away from the southern Nuke Silo. You'll have to put about seven or eight SCVs on gas to get a full stream, but if you don't want to do this simply don't place the second Command Center next to the Silo. If you need more Nukes later, you can lift off your Command Center and re-land it next to the Silo.

While this is going on, use Duke's Battlecruiser and your Wraiths to scout the immediate area to get an idea of the surroundings. Stop when you see some bunkers and Missile Turrets northwest of your base. Select the Norad II and press Y (for Yamato Gun), then left-click on the closest Turret. Not only is the Yamato Gun powerful enough to destroy a Turret in one shot, it has far superior range than almost all anti-air defenses. As Duke charges up, have him Yamato more Turrets and, when you can't get within range of a Turret without getting shot at, bunkers. If the enemy sends units such as Goliaths to counter, Duke can fight them, but try to return him to base before he takes serious damage. When he does return, select about five SCVs and have them all repair him at the same time.

You have a lot of minerals available, so use many SCVs to gather them. Then start building every single structure available and churning out your army, upgraded as much as possible (especially the Ghost—try to upgrade everything for him). You can do this at any pace you're comfortable with, but realize that the longer you stall, the more Wraith attacks from Orange base you'll have to endure. 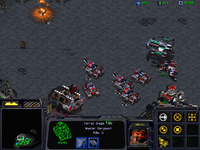 Leapfrogging 101: First, have half the Tanks Siege... 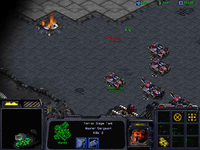 Then, advance the other half and have them Siege... 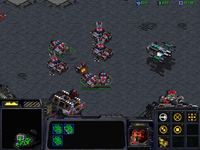 After everyone in sight is dead, advance the other half and repeat!

To take out the brown base northwest of your own you'll need 12 Marines, 6 Goliaths, and 6 Siege Tanks. Take Duke along too. Really, the Siege Tanks will be doing the dirty work here: the rest of the units are just for anti-air support and cleanup after the defenses are broken. For this assault to work, you need to micromanage your tanks. You will be "leapfrogging" them. Here's how it works: say you have 6 Tanks. When a target is visible, have them Siege there and destroy it. Then un-Siege three of them and leave the others in Siege Mode. Now advance with the mobile ones until some new targets are visible. Have the three Siege there, and now have the other three un-Siege and advance while the three in Siege Mode pound on the enemy. This is a very effective tactic to take out enemy bases while protecting your Tanks from melee or other close-range units. Refer to the screenshots for additional help. 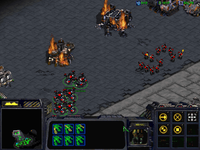 A small contingent of Marines and Goliaths are good for cleanups. 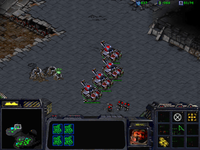 Grind along the Brown base, breaking their Turret and bunker defenses as you go. After you've finised the whole place off, bring some SCVs and start an expansion near the huge resource deposits in the northwestern corner of the base. Station your remaining units northeast of the Vespene Geyser.Before doing that, you must be sure that the Bunker-Siege Tank defenses are not destroying your units above.The best way to do this in a short time and clearly, get a Science Vessel near the place, seeing all the enemies, cloak a Ghost and nuke the area once.After that it is easy to clear the Marines up there by your defenses. The enemy will hit this spot repeatedly throughout the mission, but if you have your Tanks in Siege Mode you should be fine. In your new base, build a second Armory and a second Factory to speed up research and production. A second Barracks and Starport are not necessary, but may be helpful. Also, at this time build a Science Vessel, which will come in very handy later. Then take either Duke or some ground units and clean up the Missile Turrets and the Starport on the raised platform near the second base. 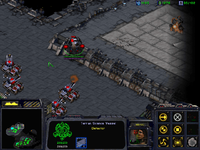 Destroy all Turrets on this platform.

You should have a lot of money coming in now. Use it to upgrade everything for your units and to build up a force of 3 Ghosts, 2 Nukes, a Science Vessel, 2 to 4 Dropships, and 12 of each of the following units: Marines, Wraiths, Goliaths, and Siege Tanks. Train another group of 12 Marines, but you don't need to hotkey them since they won't be in your final attack group. It will take some time to build this force, so during the downtime feel free to explore the rest of the map and harass the enemy with light skirmishes and Yamato strikes, but keep a safe distance from the enemy bases on the corners of the map.

While building your army, it is vital to destroy all of the Missile Turrets on the platform east of your second base. To do this, set up some Siege Tanks close to the ledge. Then move a Science Vessel near it until you can see a bunker or the Turrets themselves. Since the Vessel is spotting for them, the Siege Tanks can fire on the targets. Use this tactic to completely clear the platform.

Here's a very good light attack to attempt on the Orange base during the downtime. You need those 12 Marines that you didn't hotkey, a Ghost with Ocular Implants and Personnel Cloaking, 2 or so SCVs, 2 Dropships, a Nuke, and the Norad II. Load everyone into Dropships and fly the small fleet to the platform you should already have cleared of Turrets. Unload the SCVs on this platform. Then have the Dropship with the Ghost unload him just beyond it, on the lower ground. Immediately Cloak the Ghost, and cautiously move him forward until the Factory is in sight. Now move back until the Factory is shrouded by Fog of War, then press N (with the Ghost selected) and left-click on it. Your Ghost will automatically paint the target from a range that won't get him killed by the Nuke. Right after the Nuke hits, bring in the 12 Marines and Duke to finish the Factory off. Then have Duke retreat and be repaired while beating back attacks while the Marines, as a suicide force, all StimPack to do the most damage possible before dying.

Before your final attack on the main Orange base, you need to destroy a small outpost in the northwest corner of the map. Six Siege Tanks with a few Goliaths for air support should be enough for this job. If you are low on resources you can build an expansion here to gather the outpost's deposits. 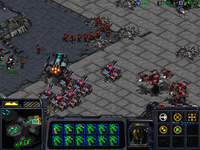 Start sending in everything you've got... 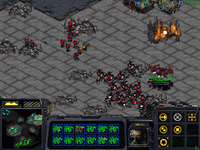 Wipe out the rest of the structures and units...

Time for the attack on the main Orange base. Airdropping the army near the enemy base requires 12 Dropships and a lot of micromanagement, so instead go northwest from the point that you were defending in your second base, turn northeast at the ramp, and follow the path. Send in your Siege Tanks first with the leapfrogging technique, and have the Wraiths close by for air defense. Then have them all Siege on the platform overlooking the base from northwest and rain down destruction while the rest of the army moves in to clean up. Remember to move the Tanks when all the targets in their range are destroyed. With an army this large it is almost impossible to lose this battle. 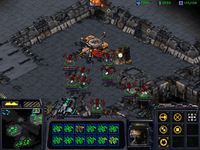 And finish off the outpost. Notice all 12 Wraiths are still intact after the battle.

Finally, send your Wraiths and Duke straight north to destroy a Starport, as well as any enemy Dropships which may be hiding nearby. If the mission doesn't end after destroying this Starport, you missed an enemy structure or two. Have the Wraiths search the entire map and destroy whatever they find, and the ending dialogue should begin.

Once you've landed all of your structures, get a strong defense A.S.A.P. Doing so grants you the ability to focus on the silos. Use Duke however you want, but don't worry about building up an army.

Once you have both silos armed, send ghosts to wreak havoc. The trick is to nuke the turrets because you just outrange their ability to detect cloaked units. Once all of the turrets are gone, use two nukes to finish the enemy Command Center. The other structures in the bases do not need to be mentioned because those will be destroyed in the process of nuking the turrets and Command Center.

The Sons of Korhal are now, well, openly rebelling against the Confederates. This cutscene shows a wing of Wraiths attacking a Confederate platform.