You're definitely not in the best position geographically. There are two large Protoss bases to destroy to your east, and a Zerg base to your north and west. Normally, this Zerg base wouldn't be a problem because it's so small. However, your job is to keep the Protoss from harming this base... which means if you even lay a hand on a Zerg structure, it's mission failure for you (you can kill their units, however). Don't worry about Protoss threats to the Zerg base (and vice-versa) though; they won't actually harm each other. Start by quickly building defenses. You will be attacked mercilessly throughout this mission, although the Protoss won't hit you until a while into the scenario. Build two bunkers on the northwest perimeter (some distance away from the ramps), and fill them up with Marines and Firebats plus Kerrigan in one of them. Place one just about where your Refinery is. Then, as soon as you're far enough in the tech tree, put two Siege Tanks in Siege Mode just a bit behind the bunkers. This will pretty much stop all Zerg attacks from that side. The entrance in the southwest won't be hit as hard, but you'll still want at least one bunker and a Siege Tank. Once you've set these up, build two full bunkers, three siege tanks, and numerous Goliaths to defend the southeast. The Protoss will attack here, and their Zealots (the most basic Protoss unit) has more HP than a Siege Tank, so you'll want some serious defenses on this side. Also, Scouts will periodically fly over to the undefended sides of your base, in which case you shall use Goliaths to take them down.

The one good thing about this scenario is the way your resources are positioned (although your minerals are noticeably far away from your Command Center). Note how the Geyser is practically next to your anti-Zerg defenses, and the mineral patches are close to your anti-Protoss defenses. This means when your bunkers need repair (and they will), you can just select a gathering SCV or two and fix it without losing much time. Oftentimes, you need to do this while you're being attacked, so this is a great advantage.

So how do you actually destroy the advanced Protoss? One word: Battlecruisers. Build two Starports (your base is pretty small, so you'll have to build most Supply Depots outside of it to make room) with Control Towers and a Science Facility with the Physics Lab add-on. Build ten Battlecruisers (this will take a long time and lots of resources) with Yamato Guns and Colossus Reactors, and upgrade ship plating and weapons to at least level 2. If you need more resources, there's a large deposit of both minerals and gas if you follow the route leading from the southwest entrance. But this position will be attacked very frequently by both enemies, so be ready with at least a few Battlecruisers and bunkers. When you have the necessary force—this is very important!--group all of your mineral SCVs at the main base and hotkey them. Then set out to conquer the Protoss.

Use Sensor Sweep to reveal the Protoss base in the upper right corner of the map. Fly your ships to the western edge of the base and slowly annihilate it. Kill Dragoons and Scouts first, since these are the units that can attack you; Photon Cannons should be dealt with Yamato Guns from far range. Also, the Gateway is where Dragoons are produced, so target that before any other structure. Make sure to kill every single probe to ensure this base won't be rebuilt. When a Battlecruiser's HP goes below 400, return that one to home base and use your hotkeyed group of SCVs to repair it quickly. If you do this right, you shouldn't lose a single Battlecruiser by mission's end. 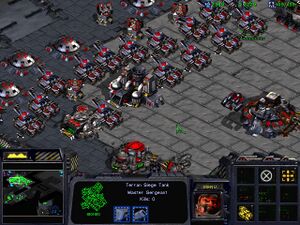 With enough Bunkers and Tanks you can easily survive the Zerg Rush.

When this base is history, repair any damages and go south. This one is a bit larger than the previous one, but you still shouldn't have any problems (if you lost any Battlecruisers, build replacements as soon as possible). When the last structure is down, your main base will be overrun with overwhelming Zerg forces (it seems that the computer always sends more units than your defenses). Do not try to counter this. Instead, pop Kerrigan out of the bunker and take her as far away from the attack as possible. A bit of scripted events will occur, Arcturus Mengsk will make a shocking decision, and you've won!

If you don't want to win the mission with Battlecruisers alone, build lots of Siege Tanks and Goliaths. With this strategy you should tackle the lower base first. When your forces consisting of at least 10 Siege Tanks, 20 Goliaths, and 12 Marines (plus Wraiths or Battlecruisers) is ready, send them down from where your expansion is to the ramps leading to the Protoss base. Set up your tanks in Siege Mode above the ramps to give them the high ground advantage, and use some Wraiths to lure Dragoons out into the loving embrace of the Tanks. Zealots will have to be killed with the Tanks as well, as a single Zealot will beat a Goliath into hulking metal any day. Slowly advance your forces with SCV and, if possible, Battlecruiser support, and once this base is done for, send your forces up after replenishing. By this point there shouldn't be much danger to your expansion anymore, so feel free to mine.