StarCraft/Zerg mission 1: Among the Ruins

This one is really straight-forward because it's more of a Zerg tutorial than an actual mission. Daggoth will tell you step by step how to build a Zerg base, but here are some key things to remember: 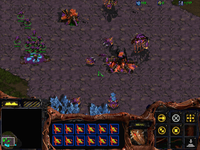 You start out with 12 Zerglings. 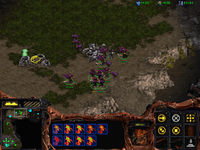 Have your forces block like this (sans the Zerglings).

After you've established yourself, Zasz will order you to destroy the Terran presence here. To start with, build 24 Zerglings (you start with 12) and 12 Hydralisks. This won't be enough, so be ready to build backup units; also, mutate your lone Creep Colony into a Sunken Colony so it can defend the Chrysalis in case of surprise attacks. Send your force up north and up the ramp at the northwestern corner of the map, and have them go east from here. You'll run into some defending units and a Starport, which your Zerglings shall destroy. Meanwhile, have the Hydralisks move to the ramp going down and physically block it so no Terran units can pass. Now, wait until you have a replenished force of 12 Hydralisks and 12 Zerglings, then move down the ramp and assault the main base (from this point on continuously build Hydralisks even if you don't think you need any more). Then, go south and destroy the Barracks, Turret, and any units that might be there to complete the mission.

As soon as you complete the beginning tutorial, make a second Hatchery right between the Mineral Fields and the Gas Geyser. Now, let it grow, and while it is, make an Evolution Chamber and the Hydralisk Den. After the hatchery is done, make the Zerg Vespene Extractor. Now, create 3 more drones, and send them all to the extractor. Now, with all your time to wait for the gas to grow, make between 6-12 more Drones, with Overlords to boot. Now, as soon as you have enough Gas, within about 3 to 4 minutes, start up Zergling Speed, and Hydralisk Attack Range. Select all six larvae and make several zerglings. Make sure to have about a group of about 36. Then, make 6-12 Hydralisks to take out the Wraiths. As soon as you get them, send the lings and hydras straight to their base. These will overpower them. Make more zerglings or hydras, depending on what you start losing, should the Hydras get killed. Once the base is destroyed, destroy the barracks, 2 Missile Turrets, and the Starport, to claim victory. 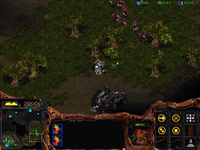 The attack on the small outpost. Note that four of the Supply Depots up north were overlooked and not destroyed.
Go to top
← Terran mission 10: The Hammer Falls | Zerg mission 1: Among the Ruins | Zerg mission 2: Egression →