When this mission starts, you are given two Drones, three Hydralisks, two Mutalisks, and six Hunter Killers. The Hunter Killers are powerful versions of Hydralisks that have been given to you by Cerebrate Daggoth, and must be awakened by sending one of your units near them. 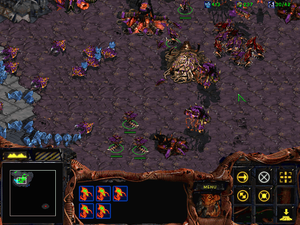 Immediately get your economy going—build at least 10 Drones for mineral gathering and then about four more for gas. Meanwhile, group the Hydralisks and Hunter Killers together and have them guard the border of your base (put them on Patrol if you wish). When you have the resources, build a Hydralisk Den, convert your single Creep Colony into a Sunken Colony, and morph another Creep Colony (to be converted into a Sunken later on) in the southern part of your base. You may also research Burrow, but it's not critically important in this mission.

Build up a good number of Hydralisks, and also make some Zerglings (don't go crazy with them though, as they're only useful against Photon Cannons and Dragoons). While building air units (Mutalisks and Scourge) isn't a necessity, if you have the time and resources go ahead and make some if only to explore the tech tree a little bit further and get to know said units better. The Protoss will attack your base once in a while, so put any finished units near the three main entrances to your base (south, southeast, and east), and throw in some Sunken Colonies for good measure. Enemy Scouts can be countered fairly easily with many Hydralisks, so there's no need to build Spore Colonies.

When you have about two (three is recommended if you're a newbie) full groups of Hydralisks (you may include the Hunter Killers here), take them plus any Mutalisks and Zerglings you may have and hotkey them accordingly. With a Drone, pick up the Chrysalis, which is on your own beacon (to do this, just select a Drone and right-click on the Chrysalis). Now, if you're good at micromanaging, you could set out like this, with your attack force leading and the Drone following behind; but if you're not, a good idea is to take the Drone and right-click on a Hunter Killer so that it will follow that Hunter Killer as it moves. This is a great way to have the Drone follow without having to worry about it; however, the one downside to it is that it will remain a fair distance behind your main group and can get killed by flanking Protoss forces. 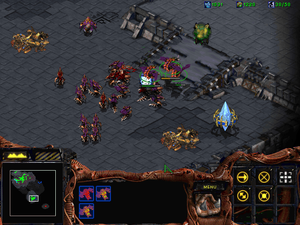 The Protoss will be no match for your numbers. 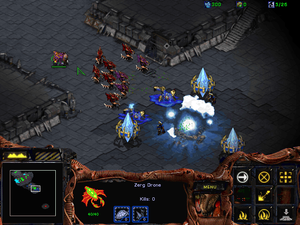 Ignore structures such as Pylons in this approach.

When you're ready, set out the southeastern path with everything you have (except Drones and Overlords, of course). You'll come across a Photon Cannon-Zealot combo, the former part of which you should be able to knock off easily with Zerglings and Mutalisks. Have the Hydralisk-Hunter Killer group deal with Zealots. When Dragoons and Scouts start coming in to help, focus fire with your H-HK group, targeting one unit at a time; this will ensure that the enemy only gets off a few attacks before dying. Keep going, and turn southwest after you've cleared the Photon Cannons (don't bother with the Pylons). You'll come across another small base, and once again you only have to destroy the Photon Cannons and enemy units. Taking time to destroy anything else the Protoss might have built is not only unnecessary, it will give patrolling enemy units time to catch up with you.

Go up the ramp once you get to it, and terminate the Zealots and Dragoons you'll come across. Just keep following the path, and you'll get to the beacon; have the Drone step on it to win the mission.

If you're having difficulty getting to the beacon because of the enemy's superior numbers, you've stalled too long building up the strike force. Start over and this time try to go about things faster.

There's a way to complete this mission in less than three minutes, but it takes some skill. As soon as you start, send a Drone to activate the Hunter Killers, and with the same Drone grab the Chrysalis. Group the Hydralisks, Mutalisks, Hunter Killers, and the other Drone together; this will give you exactly 12 units that you can hotkey into one group. Have the Chrysalis Drone follow your battle troops, and immediately set out the southeast path. This time, focus fire on everything with all your units except the Chrysalis Drone. 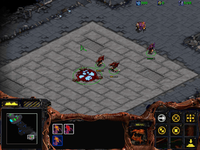 You'll probably have no trouble getting to the beacon.

Normally, you would use a tactic that lures out Zealots so ranged units kill them outside of Photon Cannons' range, but you don't have time. Speed is everything here; the more time you spend getting to the beacon, the easier it is for Protoss units in other areas of the map to catch up with you. If you get wiped out, you're pretty much screwed so start over. There's no use trying to build up a new army, because with all your units gone the Protoss will just come in and kill everything you build. But this shouldn't happen, since it's not very hard to break through the meager Protoss defenses this early into the mission.

You have the resources, so go ahead and raze enemy buildings if you wish.

You do have a lot of resources at your disposal, so you could just wipe the Protoss off the whole map if you wanted to. To do this, just make about 24 Hydralisks (including the Hunter Killers), and send them down to the main Protoss base (after destroying the auxiliary bases) which is located in the southwest corner of the map. As you send this force down, use your two Hatcheries to constantly produce Zerglings, making about six Hydralisks after every 24 Zerglings. Use the Set Rally Point function to make your troops automatically go to the base when spawned (the easiest way is to simply select a Hatchery and right-click where you want the rally point to be). After the Protoss are dead, have the Drone trot (er, crawl?) to the beacon at your leisure.

At the beginning of the mission, command the Chrysalis Drone to build a hatchery such that the goal beacon fully intersects the building at the bottom right corner. Victory can be obtained with a total elapsed time of less than ten seconds.