StarCraft/Zerg mission 4: Agent of the Swarm 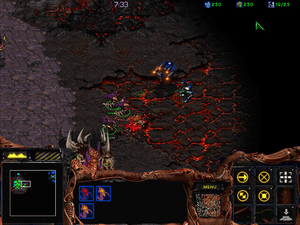 This is why you need static defense to the right.
Cerebrate Daggoth is engaging Dominion forces, but the Chrysalis continues to lure Terrans... this time, it's Jim Raynor and his Raiders. Your primary objective remains to protect the Chrysalis; however, you won't be protecting it for long, since the Chrysalis is nearing the time of hatching.

This is an island map... which is convenient because enemy forces can't attack you as easily, but the same impediment applies to you. First things first: hotkey your meager starting units and station them to the right side, near the Extractor. Almost all enemy attacks will come from this direction. Then, get busy harvesting resources and making Drones. 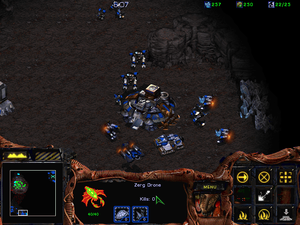 See how useful a Parasite can be? Incidentally, the Command Center in this screen is the one you infest if you're following the "War of Attrition" alternate strategy below.

Build up the Drone force until you have one on every mineral patch and about three on gas. No matter what your economic situation, you should have a Spawning Pool built by 6 minutes on the counter. Terran infantry will start attacking you in numbers around this time, and it's imperative that you have some Sunken Colonies defending the right side of your base (and you need a Spawning Pool to build Sunkens). Also, during this build-up time, feel free to Parasite any marauding Dropships with your Queens. Not only is this good practice for using the ability, you will be able to gather critical information on the layout of the Terran base and often predict their attacks (since Dropships are used to airdrop units near your base). 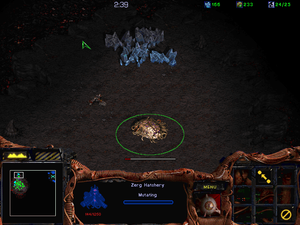 Your first expansion should be here.

Build about three Sunken Colonies plus a few Spore Colonies around the perimeter of the base, and start building units. Hydralisks and Zerglings both come in handy here, so build at least a full group of each, and when that's done morph a Spire and start making Mutalisks. Also—and this is very important—upgrade Overlord transport and speed. You'll be running short on gas, so you need an expansion; the only free geyser on the map (plus extra minerals) is on the center island. You will need these two upgrades to move Drones and defensive units there. These upgrades (and the Lair upgrade that is a prerequisite) are more important than building units if you don't have enough gas to do both. As for minerals, there's a small patch to the north of your base. Eventually, you can build a second Hatchery there and harvest. 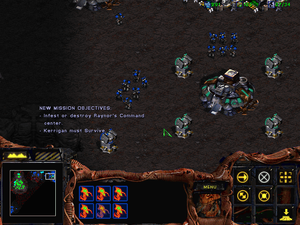 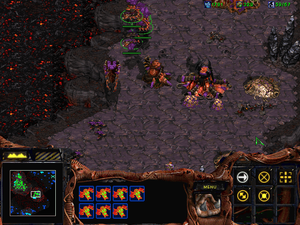 Set up your second expansion like this initially (Kerrigan is visible near the bottom of the screen).

After 10 minutes, the Chrysalis will hatch and you gain a new unit, Infested Kerrigan (yes, big shock, whatever). She is an immensely powerful hero unit; she has 400 HP and a 50 damage base attack, and also is the only unit in the game to possess a special ability of every race: Cloak from the Terrans, Consume (sacrifices one Zerg unit for 50 points of restored energy) and Ensnare (bogs down enemy units) from the Zerg, and a final Protoss ability that is not available to you in this mission... but will be soon. However, she cannot damage air units (except with the unavailable Protoss ability, of course).

You will also be given new objectives now. Jim Raynor's Command Center, which is near the top right corner of the map, must be either destroyed or infested (hint: infesting is more fun). To make a strike force, you need that gas. Therefore, take an Overlord and load three Drones, four Zerglings, and Kerrigan into it; then, have that Overlord and any Mutalisks you have (preferably at least four) and move over to the island. Get busy building a Hatchery and Extractor, and when that's done start transporting more Drones and building some at the new Hatchery to build defenses (it's a small island, so two of each Colony will suffice) and gather resources. Wraiths and Goliaths (airdropped, of course) like to make raids on this expansion, so station all your Mutalisks here.

Pretty soon, you'll have a thriving economy and enemy attacks will soon become nothing more than a nuisance. With the extra money, build a second Evolution Chamber (you should have built one early on to tech up to Spore Colonies) and a second Spire, and upgrade everything to max. It's also recommended that you research both Hydralisk upgrades at the Den, although not necessary. You have all the Queens you need, so a Queen's Nest is unnecessary unless you want to explore more of her abilities such as Spawn Broodlings.

Create a force of 24 Mutalisks, 24 Hydralisks, and 8 Zerglings; the ground units will fit onto seven Overlords. Add both Queens to the team, and set out for Raynor's Command Post. Use the Mutalisks to create a distraction and clear out the landing point (pretty close to the Center itself; see screenshot), then select all the Overlords and use the Unload All command on a clear spot. The Zerglings should go for Goliaths and Siege Tanks, against which they'll last longer, but the main work will be done by the Hydralisks. While Mutalisks kill any Firebats or Tanks that come near them (if your Queens have Spawn Broodlings enabled, cast it on the Siege Tanks and watch them get destroyed in one shot), have the Hydralisks methodically fight their way to the Command Post. You can either ground it down to rubble or Infest it with a Queen once it's damaged; either way, you win the mission.

Feeling like dragging this one on? Once you have the strike force, instead of going for Raynor's Command Post, attack and destroy the Terran forces that lie to the southern side of the map. Not only do you get more resources, you get another huge boon: Infested Terrans. You really can't do anything if you infest Raynor's Command Center, since the mission ends, but if you infest the Command Center here, you can produce deadly (and cheap) Infested Terrans that deal a whopping 500 damage (yes, five hundred) to any ground target. Of course, you'll need to manage your forces very well when attacking this base, as too much losses can mean that you won't be able to defend yourself in case of a counterattack. But if you succeed, when you're raiding Raynor's base (or any of the other Terran bases, if you choose to) you can airdrop a bunch of Infested Terrans in the middle of their base and destroy it that much more easily. This is your only opportunity to use them in the original campaign (you will not face any more Terran bases as Zerg, until the later Brood War missions), so you might as well take advantage of them.