This is another "installation" mission where you have a fixed number of units with no production or resource management possible. The map is basically one long, winding path, linear for the most part.

You start with Kerrigan, two Hunter Killers, and six Zerglings. Hotkey each unit type into separate groups, then set out to the path. On your way to the first beacon, located near the top center of the map, you'll encounter resistance from two flame turrets and some light infantry; feel free to use Kerrigan (cloaked) or the Hunter Killers to dispatch these, but try not to use the Zerglings as they'll get shredded very quickly. Any civilians you come across can either be killed or left alone; it doesn't really matter. 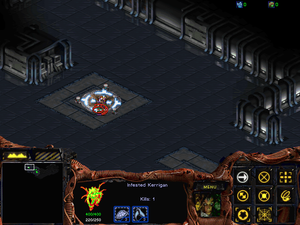 This beacon will reveal the supercomputer's location.

Have someone step on the beacon when you reach it, and the location of the supercomputer—your ultimate objective—will be revealed. Continue down the labyrinth, leading with Kerrigan and the others following closely behind. You'll encounter a Vulture and some Goliaths, and while Kerrigan can certainly do the job alone, you should use the other units (including the Zerglings this time) to help finish off the Goliaths when their ranks have thinned. Also, as you traverse this area, Ghosts and Marines will harass you from the side; only your Hunter Killers can do anything about them, so it's best to just run the gauntlet as fast as possible without fighting back. 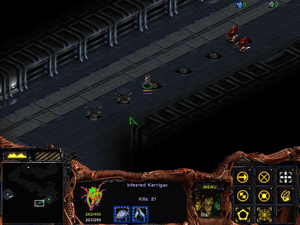 Later on, you'll encounter a trap hallway, where floor-mounted turrets pop up and start firing. All these turrets are detectors, so it's no use cloaking Kerrigan; instead, just order everyone to attack wildly. The turrets have only 50 HP each, so they go down in a blink of an eye if you use all your units. 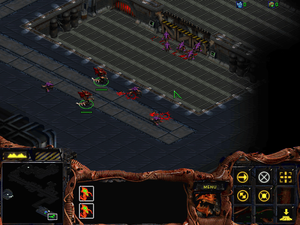 Kill the Marines that are were here.

Advance a bit more, and you'll come to a big room with some critters trapped in rooms. Have everyone go to the bottom corner of this room, where a few Marines are shooting at hapless trapped Zerglings. Dispatch them, and step on the beacon to free the Zerglings and critters (the latter don't harm you or do much of anything, so don't worry about them). But don't move the freed Zerglings yet; Take the Hunter Killers around to their door, and some trap turrets will pop up. Destroy them, and now you can take command of the Zerglings. 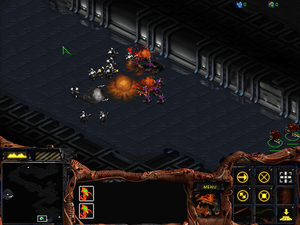 Your units will take a beating here.

The next corridor is an ambush: a squad of Marines and some rocket turrets are waiting for you. Just throw everything you've got one more time, and they'll fall in short order (albeit with casualties). 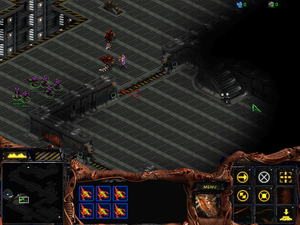 Ready for the ambush room? Go for it!

There's a locked door further down the corridor, which you can ignore for the moment. Keep going, and when you see some Firebats standing guard, cloak Kerrigan and take them out. There are more enemies in this area, so take them all out with Kerrigan, but do not walk into the small enclosed room to the northern side of the room until you're done with everyone outside. Now, take all your units and walk into that enclosed room, making sure Kerrigan goes last. As soon as Kerrigan enters, the doors will lock and yet another ambush will take place. You should know what to do by now, and when you're done, walk onto both beacons to reveal the position of the teleport that will get you to your destination and also to unlock the door that was blocking your way to that teleport. 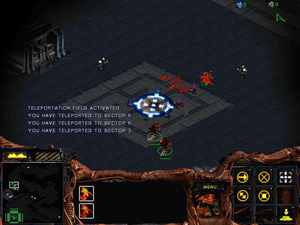 All these ambushes are getting old.

Find your way to the teleport, and once you use it another infantry garrison will greet you. Kill them, and go to where the supercomputer is. Have your Zerglings target the Ghosts, while the Hunter Killers attack the floor turrets; they'll fall quickly, and once that happens just trot Kerrigan over to the beacon to finish the mission. 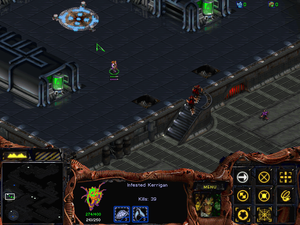 The last battle will be short but taxing on your units.

The main intent of this mission is for you to bring as many units as possible to the final encounter so that you can clear the last five ghosts and floor turrets as described above. However, if you end up with Kerrigan solo near the end, it is still possible to achieve victory. Cloaking Kerrigan is useless because of the turrets, and she cannot simply run through the ghosts to the beacon since the ghosts are situated above the stairs creating a blockade. However, if you wait until she has at least 275/400 hitpoints (make sure you have game-speed set to maximum while she regenerates health), and you are quick with your mouse, you can have her kill 2–3 ghosts while ignoring floor turrets, then run to the beacon to win.

Cinematic #6
Battle of the Amerigo

Some Terran Marines and Ghosts are sent to the Amerigo to investigate the disturbance, and come across a squad of Zerg Hydralisks. An intense firefight ensues.