You start with a modest defense force of four Hydralisks, two Mutalisks, two Guardians, and Kerrigan. Guardians are new, and they're basically bombers. One gob of their acid deals 20 explosive damage, and their range beats those of any stationary defense. However, they have no air attack and thus must be protected if they're to stay alive long enough to be worth their high cost (you're paying 100 minerals and 100 gas for a Mutalisk, then 50 minerals and 100 gas to upgrade it to a Guardian).

You have a lot of minerals at your disposal, but you'll definitely need more gas. Fortunately, there are two very large resource deposits near you: one to the east and one to the south. They're both plateaus, inaccessible by ground, and a small Protoss force guards the southern deposit. Explore both of these locations with the Mutalisks you start with so you know where they are.

Meanwhile, build a healthy number of Drones for resource gathering, and when you have a steady income start building static defense as well as some Hydralisks (also, as you're doing this try to upgrade your Hatchery to a Lair and upgrade Overlord Transport). There are two ramps that lead to your base, and each needs to be protected by two or three Sunken Colonies. Place about four Spore Colonies at regular intervals along the southern edge of your base, and station any Hydralisks you make near the ramps. This will give you a solid defense, and the small Protoss attacks that occur periodically will not bother you. 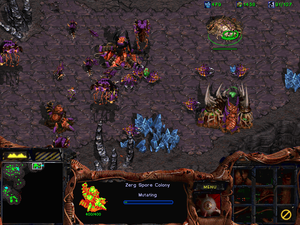 Set up a base here and you're set resource-wise.

Now, build a Spire. You need a Lair to do this, so upgrade that Hatchery if you haven't yet. Start churning out some Mutalisks, and as soon as you have about four Mutalisks and Overlord Transport researched, load Kerrigan, three Drones, and two Hydralisks onto an Overlord and start building an expansion base on the unguarded resource deposit to the east. Station every Mutalisk you make from now on at this base; ground units can't really defend it. These resources should be enough for you to finish the mission with.

Build a Queen's Nest, then upgrade your Lair into its final form, the Hive. This structure opens up the tech tree and allows the most advanced Zerg structures to be built... but not in this mission. You can, however, upgrade your Spire into a Greater Spire after the Hive upgrade, and since you need a Greater Spire to make Guardians, that's what you should do.

You can now go into mass-production mode. Build 12 Hydralisks, 12 Zerglings, 10 Mutalisks, and morph an additional 10 Mutalisks into Guardians. You can certainly build more, and you'll probably need to before this is over, but that's what you need to mount a successful attack. Upgrades aren't that important because you have a pretty large strike force, but try to research both Hydralisk upgrades, the Ground Carapace upgrade (level 2 is great), and as many of the flier upgrades as possible.

Before you set out to attack the main enemy base located in the lower right corner of the map, you should first destroy the Protoss guarding the southern resource plateau to keep them from bothering you. Take the Guardians and Mutalisks, and move in with the Guardians until the first enemy unit is in sight. Order the group to fire, and if the target flees advance until another one is in sight, and repeat. Since only Zealots and Dragoons guard this spot, the Guardians can massacre them all without suffering a scratch themselves—they have superior range to that of Dragoons. The Mutalisks are just there in case any Scouts decide to come help out. 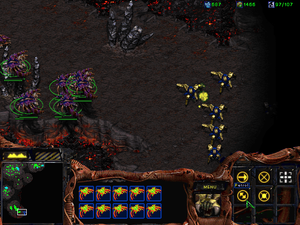 First you'll have to go through a lot of Dragoons (no, that's not all of them). 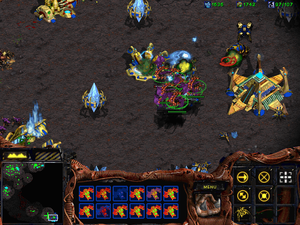 Then move into the base proper. 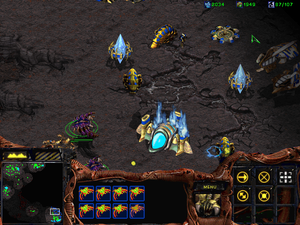 See those big crawling things the Guardians are shooting at? Those are Reavers and must be taken out immediately.

When those forces are history, it's time for the big attack. Move your army down to the lower-right corner of the map (see screenshots for exact locations). En route, you'll encounter a very large force of Dragoons. A simple Guardian raid doesn't work because there are so many of them; therefore, have the Zerglings and Hydralisks help kill the Dragoons while the Mutalisks attack any Scouts that come over. When this is done, keep going; soon you'll make it to their base. Lead with the Guardians, attacking Dragoons and Photon Cannons; the Zerglings and Hydralisks can pummel other structures, while Mutalisks remain on the lookout. Keep your eyes peeled for Reavers; these lumbering units can destroy entire rows of Hydralisks with their 100-point splash damage attacks, so air units should focus on these when you see one. You should have a huge amount of resources sitting in your base during all this, and you can definitely use that to replenish your forces. The Hydralisks in particular will need reinforcements as the attack wears on. Continue throughout the base until it's razed.

When the entire base has been destroyed, Tassadar will challenge Kerrigan to a duel. You are told to bring Kerrigan alone, although it actually doesn't matter if you bring other units. Simply airdrop Kerrigan onto the island in the center of the map and watch the show!