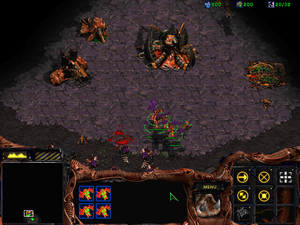 This defense won't be too hard to crack.

Your modest army starts in a canyon. Take the left path, and you'll run into an enemy Zerg outpost. There are barely any defenses here, so taking the base out isn't difficult. Once the enemy units are dead, go for the enemy Lair first; then, have one of your Drones morph into a Hatchery exactly where the Lair used to be while the attackers take the other structures out. The great thing about Zerg is that you can build things on an enemy's Creep, provided there aren't defensive structures or units nearby to foil your plan. 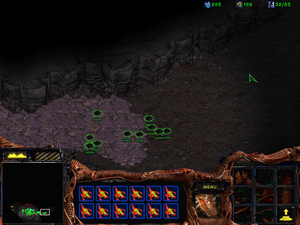 You don't have many Drones, so the initial going will be slow. Be patient, remembering to build a decent economy before you start cranking out dozens of units. Defend your base with a mix of units and structures; at first, build Sunken Colonies for ground defense and use units for air, and start building Spore Colonies later when you can afford it. The suggested defense here is to have a group of 12 Hydralisks and some Sunken Colonies stationed to the east, while Mutalisks and mixed Colonies defend the west and north. 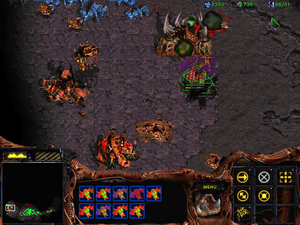 This base isn't terribly well defended either.

To satisfy the "eradicate the enemy" objective of this mission, you only need to get all the buildings; this means taking out an outpost to the west of your base, another outpost in the center right side of the map, the main uber-base occupying the entire northern side of the map, and all the Sunken and Spore Colonies along the way. Razing the main base can be very difficult without Guardians, and at your current base there's too little gas to build a significant amount of them. Luckily, that enemy outpost to the left has plenty of gas; therefore, that's where you need to attack first. 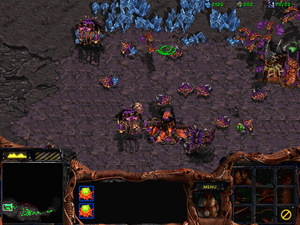 Build a base fast to survive enemy strikes.

A minimum force of 8 Mutalisks, 4 Guardians, and 12 Zerglings is needed to destroy the outpost; however, reinforcements (preferably Hydralisks) are necessary to hold it against seemingly endless enemy strikes once you occupy the position. Use the Guardians to take out the Spore Colonies in the outpost, then move the Mutalisks and Zerglings in. Zerglings, especially with the Adrenal Glands upgrade, are one of the best building destroyers in the game; a group of 12 can bring down a Colony before you know it. Have the Mutalisks protect the Zerglings from stray enemy units while they do their thing. Remember to have three or four Drones ready to start building a base as soon as the enemy is gone. 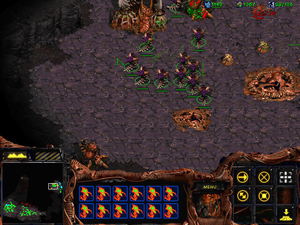 Getting tired of poorly defended bases yet?

This is actually the most poorly defended base on the map, with only one Sunken Colony and a handful of Hydralisks. 12 upgraded Zerglings and 12 Hydralisks can raze the buildings and hold the position without reinforcements. There will be an Ultralisk or two along the way, though, and to prevent these from inflicting unnecessary damage, make a Defiler, research Plague at the Mound, and cast that ability on the Ultralisk(s) when you come across it. Plague is an incredibly powerful ability that deals 25 damage per second to all targets in the area (units and buildings) until the target has 1 HP left or 300 damage is inflicted, whichever comes first (and reveals targeted Cloaked units). The Ultralisk will have 100 HP left by the time Plague is done; simply throw Hydralisks at it to bring it down in about two seconds. Defilers come in handy later also, so try to make two of them and keep them alive.

Preparing for the main base[edit]

You can either take one very large army and sweep across the map with it, or you can use a pincer attack, with half the army attacking from the left side of the enemy base and the other half attacking from the right. The first approach will often leave units getting in each others' way, and it can get hectic to manage such a large force effectively; therefore, it's recommended that you take the second. You'll be using one large group of air units to attack from the left and take out the base proper, while a large group of ground units will start from the right and wipe out all the stray Colonies.

With two resource nodes running, you should have plenty of money coming in. Build 12 Zerglings, 12 Hydralisks, 2 Defilers, 12 Mutalisks, and 12 Guardians (you really don't need more than 6 Guardians, but having more makes this go faster); research everything available at the Spawning Pool and Hydralisk Den, and all upgrades at the Evolution Chamber and Greater Spire (yes, even the melee attack one) should be at level 2 if not 3. This is because the enemy has crack troops with everything researched to the max, and your units need to fight them effectively.

The enemy base is laid out more or less symmetrically, but since Hydralisks and Zerglings took out the eastern base, stage them plus the Defilers at that spot, while the air units prepare to attack the western side. Before you start the attack, set the rally point of the main Hive to where your ground units are staging, and the rally point of the expansion Hatchery to where your air units are; this ensures reinforcements get to where they need. If and when reinforcements are needed, make swarms of Zerglings at the Hive and swarms of Mutalisks at the Hatchery. 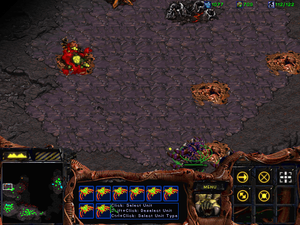 The Guardians will carve through the enemy base without problems. 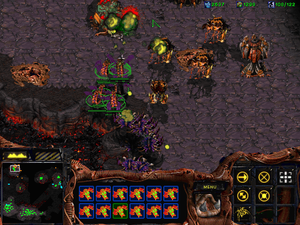 The air group will sooner or later come into the base proper. 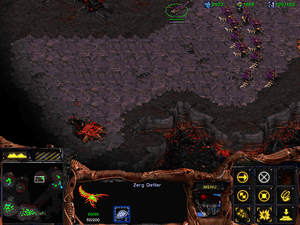 Anytime those pesky Colonies bother you, move in a Defiler.

The air group has it really easy; most of the enemy air defense consists of Spore Colonies, so have the Guardians pound away on them while the Mutalisks hang back, then once the Colonies are down let the Mutas free. Move across the enemy base this way, and you shouldn't have any trouble.

The ground attack is a bit harder. Spore Colonies are obviously not a problem, but the Sunkens are. Luckily, you have Defilers at your disposal! Whenever you run across a Sunken Colony, have a Defiler cast Plague on it to whittle down the HP, then move in with the other units. The ability does cost a lot of Defiler energy, so have that one recharge while the other one handles the next Sunken Colony. Stray Guardians are the only real threat to the ground army here, but focused fire from the Hydralisks can take them down fairly quickly. Also, in the rare situation that you're attacked by a large swarm of Guardians or Mutalisks, simply clump everyone together and have one or both Defilers cast Dark Swarm over your troops. Ground units under Dark Swarm are completely invulnerable to any ranged attacks (i.e. the Guardians' and Mutalisks' attacks), but they can fire on the enemy. However, splash attacks (such as the Siege Tank's cannon) and melee attacks still work, so watch out for those when using this in the future. 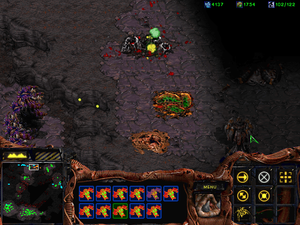 Remember that this area can only be attacked from the air.

At the very top of the map, there's a plateau inaccessible to ground units; therefore Guardians will have to do the job. Just remember not to rush this attack, taking it easy against the enemy static defense, and you'll have won before you know it.