StarCraft/Zerg mission 8: Eye for an Eye

This is a fairly complex situation. First of all, note the three beacons strewn out across the map, each guarded by an Overlord and some of your forces; if even a single Dark Templar goes past one of these beacons (thereby escaping), you lose the mission. (Don't worry about the beacons themselves, though; they are only there to show you where you need to keep your Overlord). Dark Templar are formidable foes on their own, possessing a ludicrous 40-damage attack and being permanently cloaked, but the Protoss will usually send reinforcements with them when they launch one of their periodic attacks on the beacons. So keep those Overlords there (to detect the Templar), and reinforce the troops defending those beacons until you have at least six Hydralisks near each. 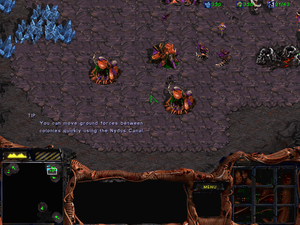 Now, take a look at your bases. Yup, plural as in bases. You have a main base in the top right corner of the map (conveniently near one of the beacons), an outpost in the top left (near another beacon), and a second outpost in the bottom right (this one is not so near a beacon). Hostile Protoss forces lie between all three of your bases. However, you also have Nydus Canals; these handy little structures instantly teleport any number of ground units from one of its entrances to the other. In this case, the left Nydus Canal in your main base leads to the top left outpost, and the one on the right leads to the bottom right. Nydus Canals work both ways, so don't worry about building more.

With that in mind, start setting up your economy. You have three Hatcheries, so make Drones with all of them and use the Nydus Canals to bring them all to the main base (which is the only one with resources). As this is going on, take the two Ultralisks (yes, you get them in this mission) and teleport them to the bottom right base, and then have them go to the southern beacon. This is because the Protoss will target this one the most often; the measly defenses you start with there will not last long. 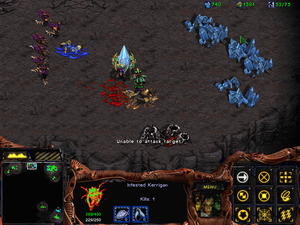 The Protoss here had no chance.

You have lots of Larvae to make units from, but not enough money is coming in to make full use of them! Luckily, near the top left outpost is a fairly large resource node, defended only by a tiny Protoss detachment. Build six Zerglings and six Hydralisks, and have them and Kerrigan go to said outpost. Then move east (staying on the same ridge) until you come to some Protoss structures. Have the team just swarm in, and you'll have wiped them out in no time. Watch out for Reavers, as they will take out your units. Build a hatchery near the resources here, and start gathering.

Now that you have more resources coming in, focus on making units and researching tech. A fairly large Protoss base lies in the area between your main base and the bottom outpost, and the best way to take it out is with large numbers of cheap units. What's the cheapest unit you can have? That's right, Zerglings. Once you've morphed one of the Hatcheries to a Hive, an upgrade named "Adrenal Glands" appears next to the Zergling speed upgrade when you select a Spawning Pool. This basically supercharges your Zerglings into attacking at 1.33 of their normal rate, which means they make awesome building-razers. You'll need to research this to really use the Zerglings to their full potential. Therefore, research both Spawning Pool upgrades and both Hydralisk Den upgrades; also, build a Greater Spire and start making some Guardians. You'll need a total of 24 Zerglings, 12 Hydralisks, 6 Mutalisks, and 6 Guardians for this.

While this is going on, you'll have to endure some attacks on the beacons and possibly on one of the outposts. A network of three to four of each Colony is sufficient to defend the outposts, and the two beacons in the top half of the map can be defended with forces from the bases, but the third, lower beacon is more difficult. This one sits between two large Protoss bases, so will have to endure a lot of attacks. Station at least six Hydralisks and two Ultralisks here, and be ready to reinforce the position at any time. At first they'll come with Dragoons and Dark Templar... however, as the mission progresses and the Protoss start making more units, you'll face more fearsome enemies.

The Protoss High Templar is a spellcaster unit, and its most powerful ability is Psionic Storm. The spell conjures up a lightning storm in the targeted area, dealing massive amounts of damage to anything caught under it. Groups of Hydralisks and Mutalisks are usually killed or severely weakened by this attack, and even more powerful units like Guardians and Ultralisks have trouble standing up to multiple Psi Storms. If one of your positions get Psi Stormed, move your units out from the area as soon as possible to avoid too much damage; but then, you can't go too far from the beacons lest a Dark Templar slip by. It's best to have Ultralisks take the brunt of these storms.

The Archon looks even deadlier, and that's because it usually is. These are created by joining two High Templar together, and they have a ridiculous shield strength of 350 points (they only have 10 HP). Archons can defeat Ultralisks in a one-on-one fight, so your best bet is to have a large number of units available to fight them. 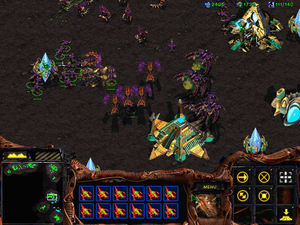 The true definition of "Zerg Rush".

When you have the attack force, have them move down south from your main base. As soon as you come across units or Photon Cannons, have the Guardians bomb them. Yes, the Zerglings are supposed to be doing the razing work here, but first you need to eliminate the Reavers in this base to allow them to do that. Don't destroy anything else with the Guardians; just Photon Cannons and any units that can kill the Guardians. When you've taken out the Reavers (they usually have two to three), let the Zerglings loose and watch the carnage. The other units can also come in and help, but they're more useful against units. If you do this right, this base can be razed without losing a single unit.

An alternative tactic is to station your Hydralisks uphill on the eastern plateau so they can take pot-shots at Probes and some of the structures. This will irritate the Protoss into sending individual units up the northeastern ramp to dislodge them, but these piecemeal attackers are easily eliminated by your air units and buried Zerglings. When you have thinned out the opposition, send Mutalisks to destroy the Nexus. If remaining Dragoons challenge them, withdraw to your Hydralisk cover or kill the defenders with Queens. Your forces around the south beacon should expect reinforcements to try to get through.

If you get the right situation you can bring a group of Hydralisks to the high ground below your main base, then bring in a group of Guardians and shell the Protoss base. Use your Hydralisks to defend against scouts attacking your Guardians. Use the Guardians to focus the Dragoons and the Reavers.

Colonizing the right half of the map[edit] 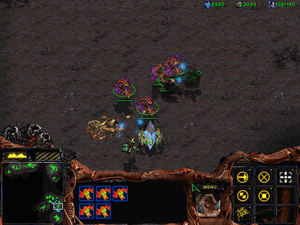 This map really does yield a crazy amount of resources...

When the base is gone, move in some Drones and start harvesting the vast resources the Protoss were mining before you. But there's more where that came from; take the air group of that attack force and scout out the higher area to the right of the base you razed. There's another good-sized resource node here, defended by a few Cannons and Scouts; destroy them, and build yet another Hatchery here to harvest resources. 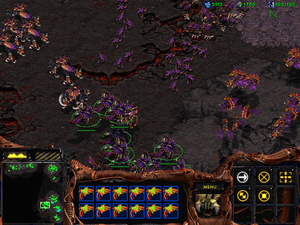 Is this another Zerg rush in preparation? Why yes it is.

The lower left corner of the map is occupied by a larger Protoss base, and therefore you'll need a larger force to take it out. Build an Ultralisk Cavern, and prepare an army of 24 Zerglings, 12 Hydralisks, 8 Guardians, 8 Mutalisks, and 6 Ultralisks (note: the screenshots show a larger force with 12 each of Guardians and Mutalisks). The Ultralisks are there to absorb the brunt of the Psi Storms and Reaver attacks (you can't just send in Guardians like last time because the High Templar and Archons will slaughter them). If you like, you can throw in a Defiler, but their abilities are not really necessary for this mission. 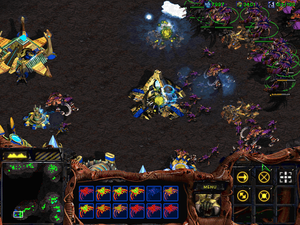 Once you have the force and every upgrade at the Evolution Chamber and Greater Spire are at least level 2, start the attack. Move from right to left in a sweeping fashion, leading with the Ultralisks then following up with Guardians and Zerglings, then finally Hydralisks and Mutalisks.

As before, you can also transport Hydralisks to the southern plateau to take out Probes and structures, with Zerglings to hit anything the Protoss respond with. The Cybernetic Core and Templar Archives should get priority, while Guardians and Queens should target Templars and Dragoons. When Protoss resistance has slackened, destroy the Nexus with Mutalisks. Note that you don't actually have to wipe out the entire base to win, just the Nexus itself, and you'll be presented with the ending dialogue.

Millions of Zerg warp towards the Protoss homeworld of Aiur. Those Protoss are about to suffer. A lot.