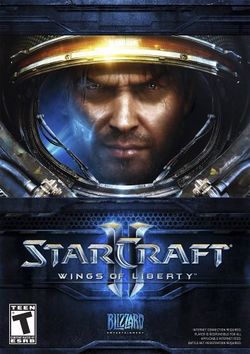 StarCraft II: Wings of Liberty is a military science fiction real-time strategy video game developed by Blizzard Entertainment as a sequel to the award-winning 1998 video game StarCraft. The game was released on Microsoft Windows and Mac OS X. Initially conceived as a single game, StarCraft II was split during development into three installments: the base game which acquired the subtitle "Wings of Liberty", and two expansion packs, Heart of the Swarm and Legacy of the Void. The decision was taken to provide more breadth to develop the game's story.

Set in the 26th century in a distant part of the Milky Way galaxy, the game is built around three species: the Terrans, human exiles from Earth; the Zerg, a race of insectoids; and the Protoss, a species with vast psionic power. Wings of Liberty specifically focuses on the Terrans, with the two expansions covering the Zerg and Protoss. The game is set four years after the events of StarCraft: Brood War, and follows the exploits of Jim Raynor as he leads an insurgent group against the autocratic Terran Dominion. However, unable to inflict major damage against the Dominion, Raynor's forces are relegated to the roles of mercenaries, recovering artifacts of an ancient species thought extinct, the Xel'Naga, for their enigmatic employers. The game reunites old characters from the original game, as well as introducing new characters and locations to the franchise.