All zerg units are created from Larva. When a larva morphs into a Zerg unit of any kind then they enter a Cocoon state which takes time to hatch depending how expensive the unit is. All Zerg units can self heal themselves slowly but the Queens Tansfusion can speed healing of units faster with 50 HP bonus to units.

The Larva reappears in StarCraft II. It is protected by light armor and has an armor of ten. 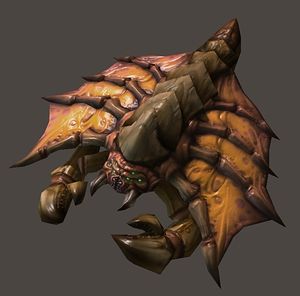 Can gather resources and turn into structures. 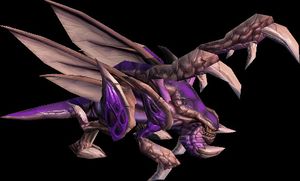 Zerglings always hatch in pair from zerg cocoons and are useful on rushing unprepared foes. Can morph into banelings and burrow. Like in starcraft the Zergling must be upgraded to move faster and attack faster. The Zerglings are strong against most foes including marauders, hydralisks, immortals, thors and stalkers but weak against banelings, hellions and colossus. 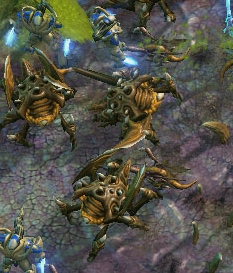 Armored anti ground assault unit. It heals fast when burrowed and can move while burrowed. Strong against hellions, reapers, marines, zerglings and zealots but weak against ultralisks, immortals and marauders and any air units. 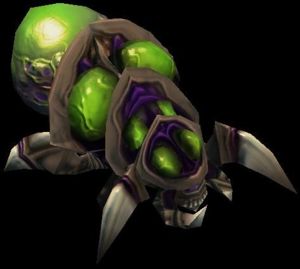 The Baneling is a wheel-shaped explosive Zerg strain descended from the Zergling. Banelings roll around the battlefield and kill opponents with a low-damage suicide attack caused by their explosive body chemistry.

Banelings are strong against melee units but are weak against ranged weapons due to their low hit points. A Baneling Nest is required to spawn them, which also provides upgrades.

Its splash damage does not hurt friendly units.

If they target structures they do very serious damage and they can also blow up while burrowed. 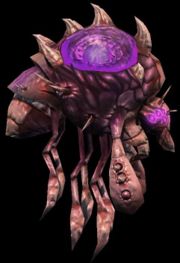 The Overlord has made an appearance in StarCraft II. It functions in a manner similar to its StarCraft I predecessor (a flying Control-producing unit). Can generate creep when not moving but the weakness is the Overlord is the most slowest unit in the game when not upgraded and must morph into an Overseer in order to detect stealth. 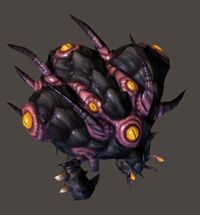 The Overseer is a Zerg unit evolved from the Overlord.

The mutation gives it the ability to detect cloaked and burrowed units, along with an increased sight range. However, it loses the Overlord's Creep and Slime abilities.

The Overseer's sight radius expands when it stays still and shrinks when it moves.

Can disguise as any unit. Created from Overseers and can be detected with detectors. 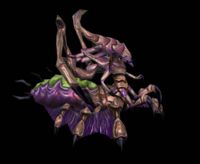 The Queen is different in Starcraft II

The Queen appears in StarCraft II, though is a vastly different unit from its predecessor, first notably now walking on the ground. It functions as a Brood Mother, with abilities such as restoring health to Zerg structures and injecting additional Larva into Hatcheries. You can train a Queen from a Hatchery, Lair or Hive, without using a larva. It costs about 150 minerals. The Queen is not a combat unit and it is costly to replace so don't expect this unit to win in fights with marines, zerglings and zealots. 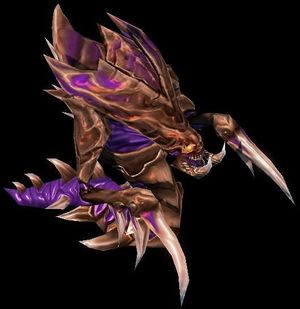 A ranged unit that can be upgraded with longer attack range. Still weak to colossus but can survive a tad longer than a marine but requires some gas and they require a lair to be morphed.

Strong against most enemies but weak against banelings, siege tanks, hellions and colossi.

Appears in the Starcraft II Map editor this unit still needs to burrow to attack and it does 15 splash damage to most targets and does 15 bonus damage to armored units.

The Infestor is a spellcaster that can move while burrowed. It can mind control even probes, SCVs and drones, it can do Fungal growth which damage multiple enemy units and can spawn infested marines.

The Infestor can only control targets for a short time but it can make probes built a nexus before the temporary control is over.

The Infested Terran is a different unit than StarCraft's unit of the same name; they're essentially regular Marines with Zerg appendages, so instead of detonating themselves, they shoot while moving a bit slower than the regular Marine.

Strongest Zerg ground unit. Can take on groups of enemies and resist stun and mind control effects. Has a lot of health and can now burrow. Does extra damage against armored targets now and when fully upgraded with all armor upgrades they have equal armor to Battlecruisers.

Ultralisks can defeat Thors, roaches and colossus easily but is weak against any airborne attackers, immortals, siege tanks, zealots, dark templars and marauders.

Strong against Vikings, Brood lords, Siege tanks, Void rays and units that cannot hit air but weak against all kinds of Anti air including thors, Corruptors and phoenixes. 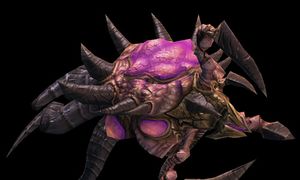 Strong anti air flyer that is only good against things that are Massive units only like Battlecruisers. This creature might have the ability to make enemies take more damage and might cover buildings in slime which prevents them from functioning.

Must have a greater spire to morph corruptors into brood lords.

The Corruptors are strong against Battlecruisers, mutalisks, phoenixes, colossus, Motherships, brood lords and carriers but weak against ground units, Void rays or Vikings. 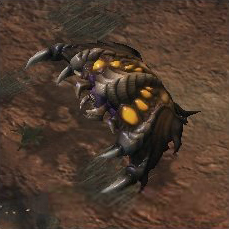 Brood Lords are dangerous to any ground units and structures. They have lots of HP and a long range attack which does deadly damage. Each attack will also spawn one or two Broodlings. Their size is massive and they will not fight anyone that can fly.

They got a HP of 225 and cost 4 control and is slower flyer than battlecruisers so Vikings will wipe them out easily.

Small creatures with a short life span. These are created by Brood lords and destroyed zerg structures.

Can be used to transport any zerg ground unit anywhere on the map.

The Nydus Worm is a StarCraft II Zerg transport unit used to transport large numbers of any large or small units.

It can transform itself into a Nydus Canal, at which point units can enter it and "accessed" from any Nydus Warren or other canal. After being loaded with units, it can also transform back into a Nydus Worm for transport.

The Nydus Worm works like a Ghost nuke; the player places a beacon, and a few seconds later the Nydus Worm pops up.

The Nydus Worm is treated as an armored unit.

There are some campaign units that are not spawnable in multiplayer.

The scourge is a suicide attacker that is only seen in the campaign. It is still powerful against air units and is not buildable.

A powerful zerg beast that is bigger than any Mothership and Battlecruiser. It has powerful tentacles for ground, powerful anti air weapons and can spawn various zerg units. It also has powerful abilities that can do serious damage. It is advised to attack it before it can move.

A super powerful version of the Ultralisk. Only seen in the campaign and it can devastate any ground unit it attacks.

Rarely seen and it can attack air and ground but it is often a bonus objective that the player must kill to earn research points.

Still a super powerful version range attacker of the hydralisk. These are very dangerous units and are often seen escorting the Queen of Blades.